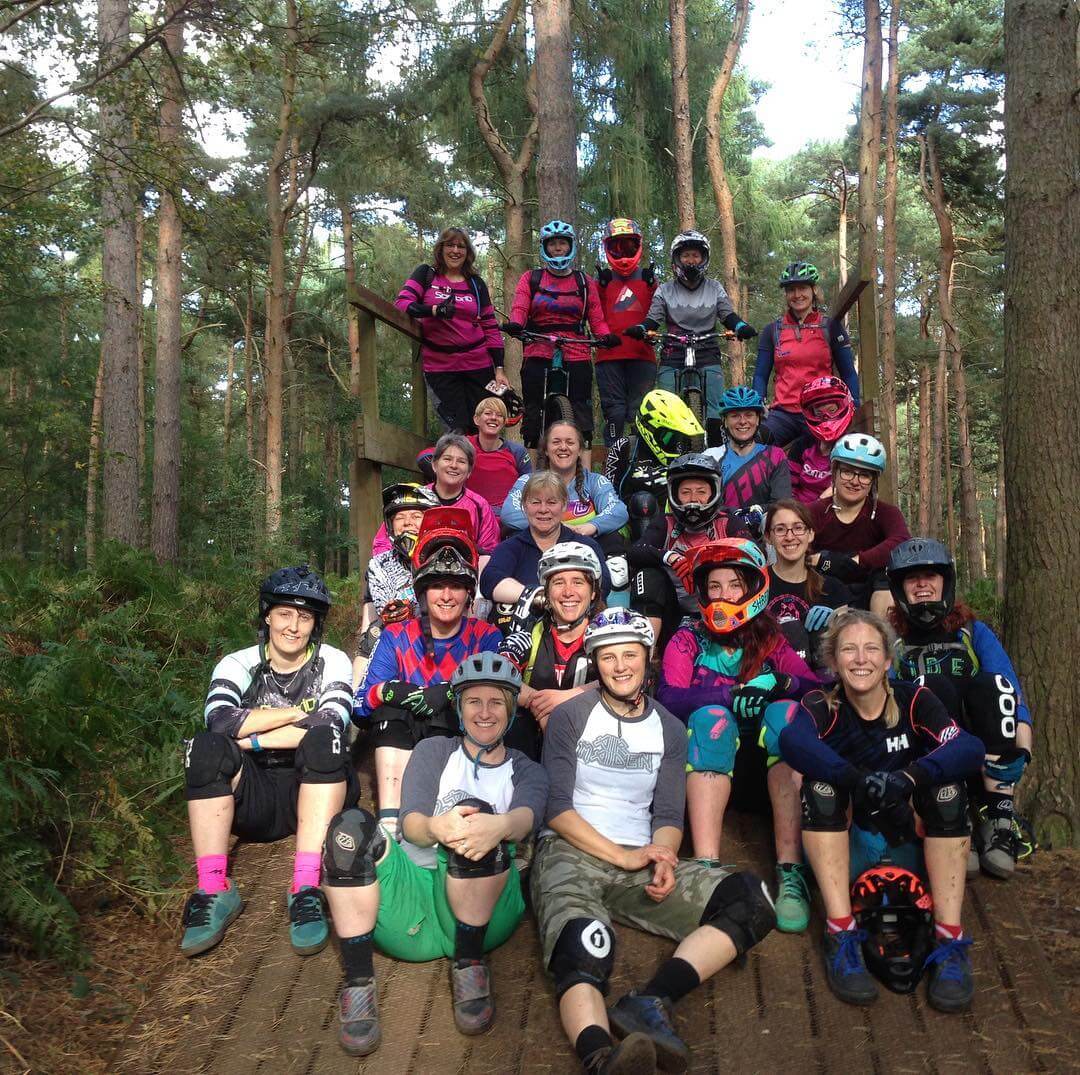 In women’s mountain biking, group coaching doesn’t come with a better pedigree than Air Maiden. After several years living and biking in Canada, Lynne Armstrong returned to Scotland with a desire to bring some of the Canadian women’s MTB culture to our shores: Air Maiden was born. As a DH racer, Crankworx competitor and coach, Lynne Armstrong’s Air Maiden was never going to be a ‘pink’ version of coaching but there is something special that happens when you bring a bunch of women together and really push their comfort zones. Teaching them different skills and giving them the confidence to do new things. Having established a reputation for great coaching, Lynne wanted to bring Air Maiden down South, cue the latest coaching day at Chicksands Bike Park. Being near Bedford, this bike park is well located for riders in central and southern England. In coaching terms, it offers a broad spectrum of challenges to suit all abilities, from small jumps through to 20’+ gaps, a pump track, dual slalom track and a variety of drop offs to perfect.

If you’ve never been before, Chicksands doesn’t look much from the road. It’s an area of woodland on one side of a country lane with a dirt car park opposite. The only clue it’s there is a board with details of the bike park rules and a blackboard sign in the trees reading ‘Thai food here’. For those in the know, the Thai food van held a lot of promise come lunch time and was also a perfect landmark while trying to find the location! Lynne would be coaching alongside champs from the worlds of DH, 4x and BMX: Jess Stone, Katy Curd and Joey Gough. Pretty quickly the car park filled up with women, much to the surprise of a couple of blokes who’d arrived for a Friday morning blast round the trails. United by our love of MTB we were a pretty diverse bunch of riders. We must have ranged in age from 20s to 50s, with some people having biked from childhood and others starting only a few months ago. Judging by helmets alone there were DH riders, Enduro and XC riders in our midst.

The day started with an hilarious group warm up, practising manuals – roughly 20 riders weaving round a sandy plateau amongst Scots Pines working on sliding their bums back, powering down through their legs/heels and lifting up the front wheel – all whilst trying to avoid each other. Suffice to say the sound of laughter was soon ringing through the woods (maybe it was just me, I am pretty loud!) When we’d all had a chance to check our technique, we split into equal groups with those who were more confident with drop offs starting with Katy and Jess, while the rest of us headed over to the pump track with Lynne and Joey. Joey’s BMX background meant that she was a dream to watch on the pump track while Lynne explained how to weight and lighten the bike to create speed. I’ve tried a few pump tracks now and this one was great. It had a mix of fun whoops and berms giving you speed and confidence before you turn into a run of very tight rollers. Several coached laps later it was time to move over to a downhill trail to practice cornering. Using the skills from the pump track to weight the bikes we worked on controlling speed through the turns and using the solid berms of the trail to suck us round and spit us out. With tips on the attack position: keep your arms out like chicken wings and your chin over the stem combining with ‘show the berm your bum’ to remind you to involve your whole body, cornering became a whole lot easier and far more fun.

Half way through the morning the groups swapped over and it was time to tackle drop offs with Katy and Jess. Drop offs are a real weakness of mine (as you’ll know if you’ve been reading for a while) and I was equally excited and nervous to see that we were going to be practicing on a sharp lip that resembled the bomb holes I play in on my home trails. We started by rolling the drop, keeping our weight far further forward than we usually would, enabling us to remain in control of the bikes and not simply be drawn along behind them. After moving on to a basic pump at the lip, unweighting the bike and lifting the front wheel we progressed to a full manual-based drop off. Before long we were all heading over the edge with increasing confidence.

After lunch we returned to the plateau to destroy our pad-thai-induced-comas with bunny hop practice, before heading over to the dual slalom track to focus on jumping. I’ve never been able to get much air on jumps and had pretty much zero expectations for this part of the day. However, I LOVE slalom tracks and with a few tips on technique I was soon getting air over the table tops! It was such a relief to finally start progressing in this area – and it should really help benefit my riding as a whole. We were then honoured to see Katy sending it over some big jumps for the first time following an 18 month break due to injury! Following Joey, they flew effortlessly over the table-tops and gap jumps, while we all stood and watched, enormous grins plastered across our faces. After their little demonstration we were all fired up and so we split back into two groups. Those who were able to tackle dirt jumps staying put and the rest of us heading for a section of downhill track to build our skills on a couple of jumps and doubles. We all joined up again about 3pm for playtime on the dual slalom course. Just like kids, we spent the rest of the afternoon racing down, walking up and racing down again until it was time to go home.

In my experience, MTB girls are particularly good at pointing out and reinforcing the positives in each other’s riding and you soon realise that everyone’s got different strengths and weaknesses. But it was the combination of this and the skills of four of the country’s top female coaches that meant many of us saw results we hadn’t anticipated and so, if you ever get the chance to go on an Air Maiden coaching day, do it. As for me? Well, it’s a case of ‘please come back down South again next year, Air Maiden, because I want be first on the list to sign up’!