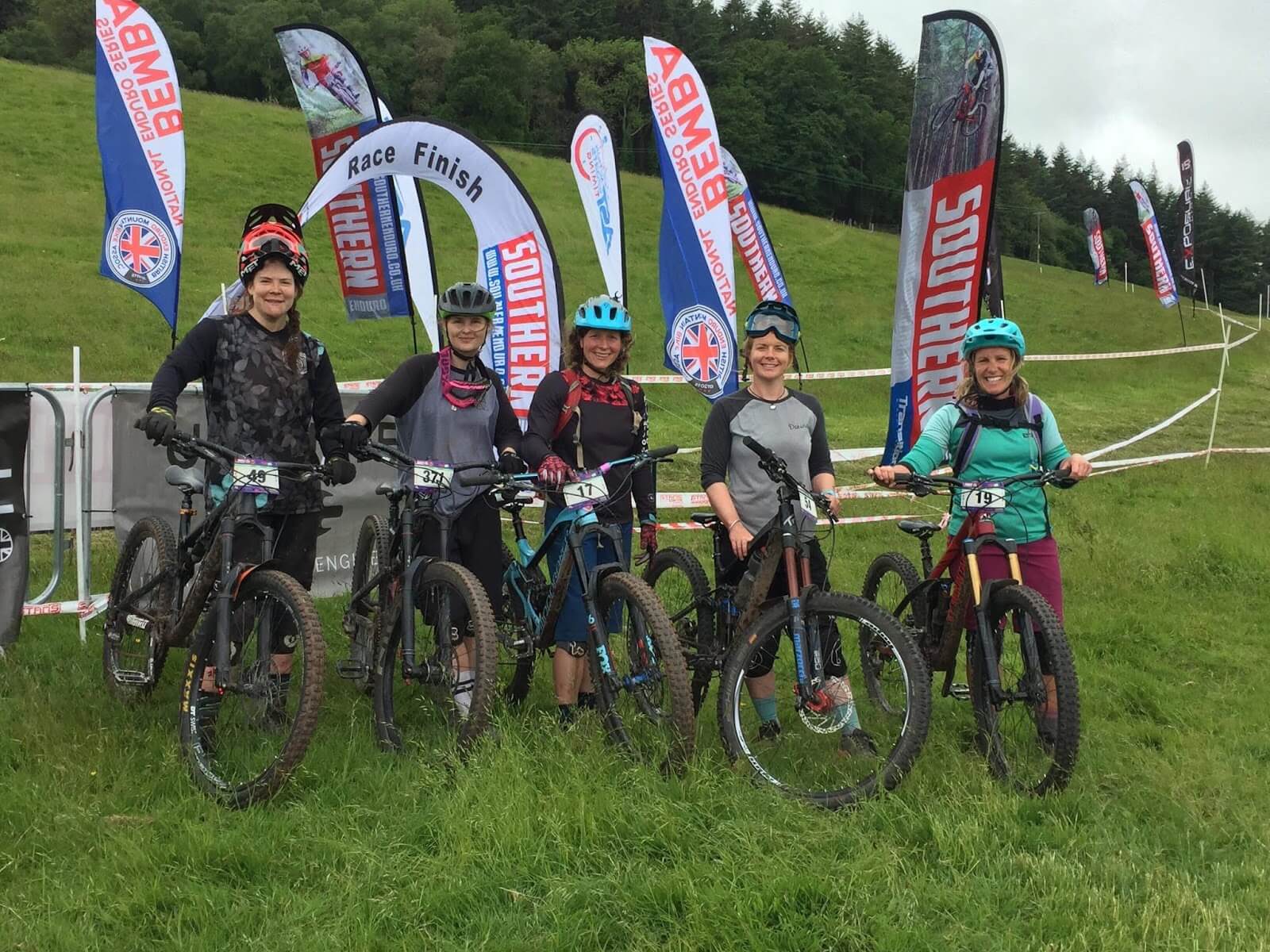 It was Mollie’s wish that as her 40th birthday weekend clashed with the double whammy Southern Enduro Champs and Round three of the BEMBA National Enduro Series on Exmoor, that we all took part to celebrate. Well, no hardship for me, I was going anyway! But our other friends; the two Hannahs (aka Mase and Cock) hadn’t raced Enduro before and Fran, who had decided that she didn’t like the pressure of racing, put their entries in and a weekend of racing was on the cards.

My husband, Whippet and our two friends Richard and Andrea were also up for the weekend, as well as a whole load of others from the Cornish / Devon contingent. As with last year, this event is hugely popular with us South West folk, as although we have had more races this way in the last twelve months, the trails in Minehead are well worth the 2 – 3 hour drive.

Saturday, for Mollie, the Hannah’s and I, was for practice but for those doing the Southern Enduro Lite, it was race day. From 11 until 3.30, Whippet, Andrea, Richard, Fran and Adie were racing a mashup of what would be our stages 4-7. This meant that we could practice those stages from 9.30 until 11 and again from 3.30 until 5. Whilst they were racing, us full enduro folk were off over the hill to get our practice in on stages 1-3. Confused? We all were!

Although I didn’t think it possible, we managed to get all 4 Lite stages practiced within the morning slot, seeing us back at the race village to catch a coffee, take a bite and watch our friends start!

And whilst we tackled those tricky stages over the hill, it seems our friends were smashing up the pack! Fran managed to bag second place in Female Seniors, Andrea a second in Female Vets (sandwiched by two other Devonians; Vanessa May and Jane Gilham) and Richard got 10th in Male Vets! Whippet had a pb, coming 24th in the vets category too!

As for race day, it has been noted that I seemed awfully jolly. Normally I’m introverted, focused and my resting bitch face takes hold. However, after a photo of the massive female field, we left the race village as a five-some (joined by Mase’s mate Gill), amongst smiles and whoops to head straight… to the toilet!

Up and over the hill, we laughed, chatted and forgot that we were racing entirely. So as we approached stage 1, I didn’t really feel that prepared. However, as the Enduro ‘go’ clock ticked down the thirty second gap from the rider infront I tried to find my focus. Coach Rob’s words were in my head; “Pump Jones, f-ing pump!” as all I could remember from stage one was roots and short cuts through corners! (Well, one, and I missed it!) There was a horrible fire road crossing mid way through this stage that extended it from last years finish point to send you over a wall and along an off camber, rooty section to finish. I came in puffing (always a good sign) feeling I’d ridden it ok but not to the best of my ability.

Stage 2 is infamous in this event as it has a very tricky ‘A’ line and is the steepest, most technical of all the stages here. Approaching the gate, there was no queue but as we faffed about with goggles and caught our breathes, a few others approached. We weren’t hurrying at all and let those riders ride on in front of us. They had asked for a minute after them and we obliged but as I set off down in front of our group, I approached a girl on the trail. Calling “rider” she pulled over and let me pass but I couldn’t help but feel terrible for wrecking her run. As I came into the A, B split, I could see another rider heading down the B line. In an attempt to get through the A in front of her, I rushed through the first high corner and messed up my line on the second vital left hander, sending my bike into the loam and me over the bars down the trail. The helpful marshall picked up my bike as I ran back up the hill to it. I came into the next steep section, just behind the girl in front and bless her, she threw herself off the side of the steepest part to let me through, completely ruining her own run. I felt terrible and so annoyed at myself for not giving them more time. I apologised at the bottom but couldn’t help but feel that I’d not only ruined their races but my own as well for not heading into the trail when it was clear.

All the way up climb three I fretted about this, whilst I really should’ve been worrying about Mase who had come off and potentially caused her newly healed shoulder some trauma. I gave myself a firm talking to after Mollie tried to talk me out of my slump. It was her birthday and I really didn’t want to be the one to ruin it.

Up to stage three and my mind was once again a blur (and still a bit of an angry one if I’m honest!) In my head I couldn’t remember what bits were on stage 1 (even though I’d just ridden it) and stage 3 as they were so similar, but I did remember a very sharp uphill pedal and some high lines that needed to be hit. This stage was ok but I did have a scooting moment after sliding out on a root, midway up said pedal.

Back to the top of the hill, we stopped midway up on a bench to admire the view. It was time to put stage 2 behind me and enjoy the trails on the other side of the hill. I’d walked three of them this morning whilst searching for my errant dog and felt that here was where I could make up time, if that was at all possible given the competition!

All of these stages were tight through the trees with varying amounts of flow. I’d walked stage 4 three times and during my morning walk had worked out some line choices. I think this actually set me back for although my run felt fantastic, with a really fun, pumpy fireroad finish, it turned out to be my worst placed run of the day and I think that was from overthinking and not just riding.

Although stage 5 had felt a bit pokey and lacking flow during practice, it was the one that had us all grinning from ear to ear at the end! There was a road gap midway through the run that I had hit nicely during practice but no one else had chanced it. I knew they were all capable and told them exactly what to expect. Every single one of us tried it and the whoops of elation at the end was amazing!!

Stage 6 had been everyone’s favourite in practice and it didn’t fail to disappoint for most of us. Gill, unfortunately took a tumble just before the end and hit the fireroad in the same frame of mind as I had been at the end of stage 2; mad!!
Up the climb and into stage 7, the last of the day. We were all chatting and enjoying each other’s company so much that we were at the top before we realised. Whippet had been watching the live timing at the bottom and was trying to tell me where I was in the pack. I did NOT want to know!

Fran and Adie had been supporting us all the way around (they must have walked miles!) and were in the middle of the stage to cheer us all on. It went without incident and I hit the finish field feeling elated. I knew I’d made mistakes, I knew my result wasn’t going to be great but I didn’t care; I had had the best day with my friends (this is twice this has happened now!) I heard my kids shouting as I thrust my knees out left and right, trying to hold the high line as the tape flowed through the steep field. That feeling is amazing!!!

I ran out of the gate and up towards my kids. Whip was desperate to tell me that I was in eighth after stage 6. I was secretly hoping for top five but having seen the field this morning, knew that I had to be happy with top ten. I still couldn’t help but be disappointed. I then met Sam Bosher on my way to hand in my chip, who said I was sitting in third. Eh?! That couldn’t be right. But it was. The screen was flashing third but as I handed in my chip, the printout told me that I was in fourth. I was still so unbelievably happy with that – but obviously it could all change depending on who was left out on the field.

A coffee and a lot of chat later, it looked like everyone was in and I was still in fourth! At a National!! What?!!!!! I know I should strive for third or higher but I have to say that I was even more elated to see that the ex DH racer, Ellie Maxfield had beaten me by a minute. Even with my crash on stage 2, I had not lost a minute and so there was nothing to regret. Obviously I could go faster in future, but….! They reckon that this was the largest field of female riders next to Ard Rock so to come fourth feels flipping ace!

Mollie finished 12th in our class. Mase finished 15th and Cock in 18th in Seniors. Considering Mase has only been back on the bike for a few weeks after breaking her shoulder in January, and this was both her and Cock’s first enduro, I think we all did ourselves extremely proud.

I was worried that I wasn’t taking race day seriously enough but what does it matter? I had a brilliant time and met some truely amazing women whilst we were out there! I actually believe that being relaxed helped my riding and perhaps I should do this sociable thing more often!!

Thanks to Caroline and Will Hoddinott (the parents) for giving up their weekend (and their sanity) to camp with us and our kids! Even in their absence, my brother and my Thursday night ride group were lending their support so thanks boys! And thanks once again to Trailmunki, Flow MTB and The Fitness Factory, Lostwithiel for their support