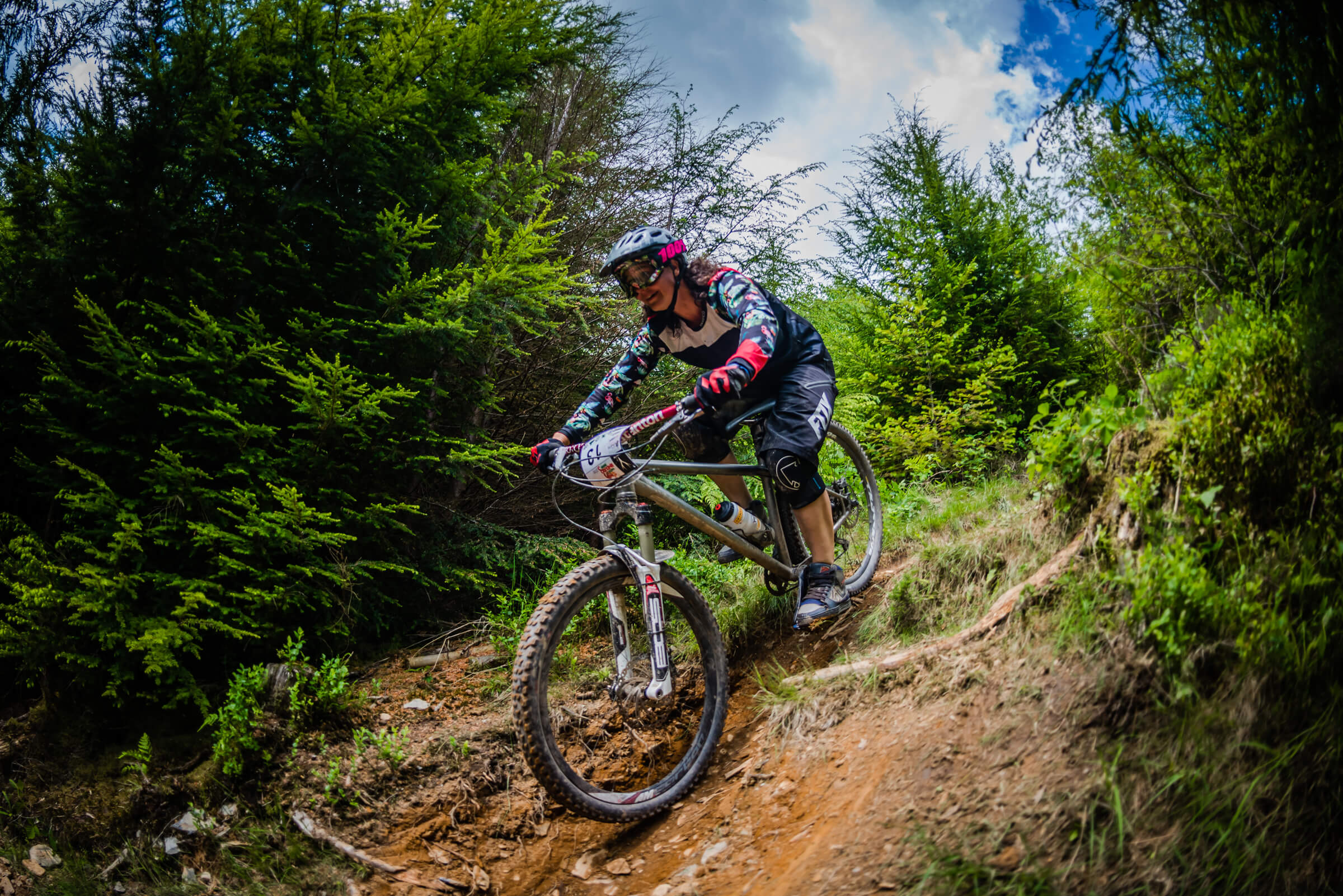 Flow MTB rider Heather took part in the 2nd round of the 2018 Welsh Enduro Series at Dyfi East Side. With the sun shining, 4 varied stages and a little bit of gaffer tape there was no stopping Heather as she made it into second place. Here’s her race report

Are you sure we went racing?! Because honestly it felt like a camp off with mates, ragging some epic trails and swimming in the river! Yes, it was a sunny one, and after last year’s Storm Brian atrocities we deserved it. It’s such a great community at WES and it was great to see familiar faces, I bumped into Claire Bennet early on and we set off for practice together. The trails were really varied with something for everyone. Stage one was loamy and flowing, stage two was more technical with tight
corners, a long fire road pedal and then a steeper end section, stage three traversed the side of the hill ensuring you maintained speed and flow, and finally stage four was rooty fun times. Perfect.

After practice I took my dog to the river by the camping field, it was so nice to just chill before racing, eat some food, throw sticks for the hound and paddle in the river. I set off for racing with Claire Bennett and Clare Mitchell (or the 2 Clares as I now call them), it was great to ride with them and have a good chat along the way. We were taking our time on the transitions as it was REALLY hot, searching for a bit of shade or relishing in a mild breeze. Stage one went well, it felt slow but sometimes that is the way. On the way to stage two I started having issues with my shifter and ended up having to ask the medics for tape in order to hold it in place. Tthis didn’t bode well as stage 2 is the pedally stage and I was definitely going to need to change gears!

In the end the tape worked perfectly, I had a few moments on the top section, made the most of my roadie training to get some power down on the fire road and then ended up on the wrong side of a tree stump dropping into the second section. I quickly pulled the bike back on to track and really enjoyed the last section (give me steep switchbacks in the woods any day!). Unfortunately, at the end of the stage my shifter fell off again. Fortunately, Claire Bennett had gaffer tape in her pack and we soon had it back on the handle bars. I had been dreading stage three, I just hadn’t been able to find my flow on it in practice. With Flow MTB sponsoring me there were no excuses, I set off and all the way along I kept looking as far as I could down the trail and repeating in my head ‘flow, find your flow, you can do it’. The Flow magic worked and I felt great on the stage, despite kicking something pretty hard and earning a nice purple foot. It’s great the buzz you get when you’ve ridden a stage well. And so, on to the final stage, it’s a downhill transition which was nice after the long transition from 2 to 3. I’d spotted a couple of lines in practice that I wanted to nail and somehow I found all of them, sweeping out of the trees into the glorious sunshine for the final section felt so good, dropping out the bottom of the trail with a grin on my face. Just such a cracking day.

We headed back to camp and, after handing my timing chip in, I grabbed a towel and headed for a swim in the river. The water was lush. To top off a fantastic day the 2 Clares and I finished on the podium, what more could you ask for? I must give full credit to the Welsh Enduro Series for a fantastic event: everything ran on time, the stages were fantastic, the location was perfect. I know they didn’t organise the weather but sometimes the gods shine on you. Bring on round 3!