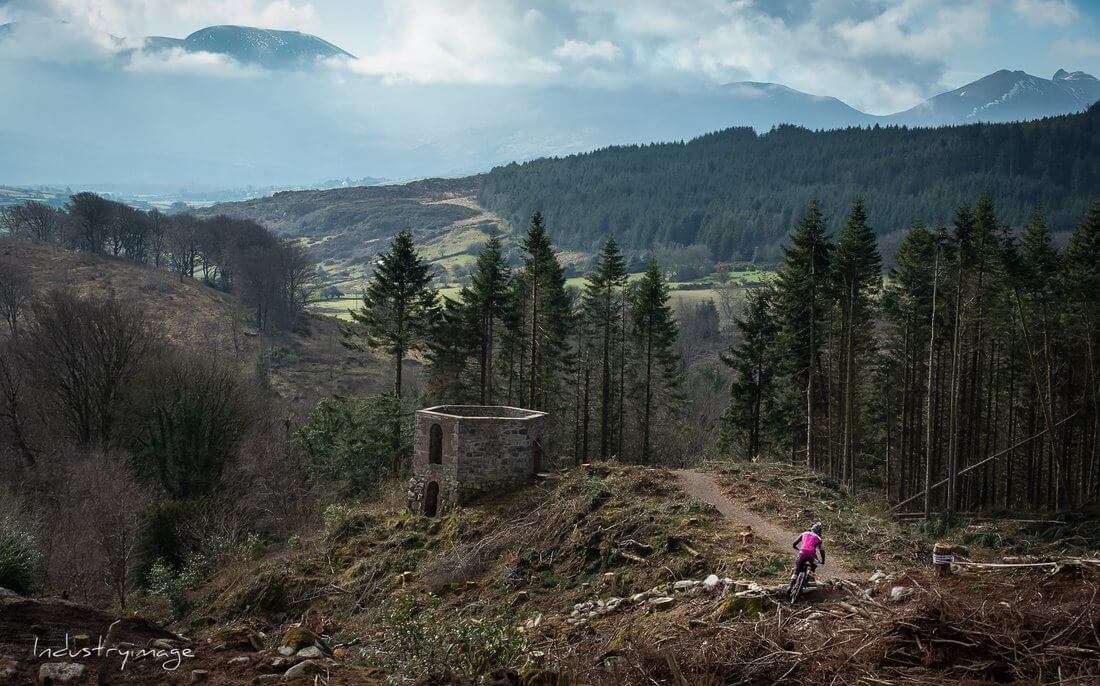 The Vitus First Tracks Enduro Cups are held on some of the finest trails in Northern Ireland. Aimed at intermediate to advanced riders there are 4 rounds in the series and each venue has its own unique set of challenges. Each round is between 16-28km long (including transitions) and consists of up to 6 timed stages of natural single track/trail centre trails that are mostly gravity orientated.  Stage times are added together for a total time that decides positions in each category.

This weekend I headed off in my van for another weekend of racing, thrills and spills! After being down south in Co.Cork last week, this week I was up the other end of the country in Castlewellan Forest Park for the first round of the Vitus First Tracks Enduro Cup.

I arrived on Saturday afternoon and didn’t delay on getting the van parked up, gear on and bike set up for an afternoon of practice. The weather had been dry all morning but that didn’t reflect on the trails! ​

The stages were better than ever this year with a nice mix of challenging natural sections, fun single-track and relaxed transitions that meandered through the forest and out to the back of the mountain which opened up to stunning mountainous views. ​

After a full afternoon of practicing each of the five stages I headed back to the campsite for a hot shower and a serious feed! Feeling really content with how practice went I spent the evening chilling out at the campsite and enjoying my first night camping in the van since last summer.

I woke up the morning of the race feeling really fresh and full of energy. I had taken it pretty handy in practice, walking most of the hills on the transitions, saving my legs for race day. Smart nutrition post practice also made a big difference so I was glad for the race experience to know what works for me and what doesn’t.

Stage 1 was one of my favorite stages. Starting off on a tricky boggy section, which was much worse in practice, I slid my way down the track through deep ruts, over boggy drops and around fun corners. Then it was a short fire road sprint into the forest onto the fast singletrack to the finish line.

Stages 2 and 3 were both great craic, and stage 4 had similar technical shoots and drops to stage 1. Stage 5 was the one stage where all the last remainding power and endurance in the legs was needed as this was a full on trail centre sprint to the end with a fun pumptrack into the finish! It was great coming into the crowds of spectators cheering and clapping as I pumped my way around, giving every last ounce of energy I had left in the tank!

Glyn and Cat O’Brien, as well as the rest of the First Tracks crew, provided both racers and spectators with a super weekend long event that definitely has left me wanting more! To take the win was just the icing on the cake! Thank you and well done guys for such a brilliant race!

Congrats to pinner Hannah Harvey on 2nd and Spaniard Tracy Bisbin on 3rd!