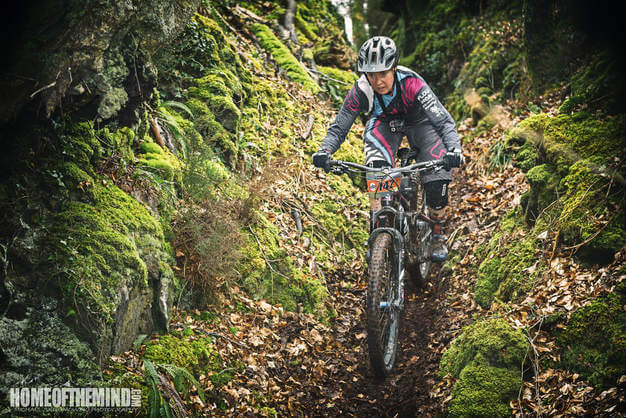 Flow MTB rider Michelle took part in the first round of the 2018 Polygon Enduro series supported by bikingdirty.com in Nagles, Co.Cork

Flow MTB rider Michelle took part in the 1st round of the 2018 Ploygon Enduro Series in Nagles, County Cork. Her first race of 2018 and at a new venue Michelle’s winter training paid off and she went on to pick up first place. Here’s her race report

​The first race of the season and it couldn’t come quick enough! Its been five months since my last race, the Redbull Foxhunt, so to end last season on a win and to start this season on a win is a real confidence boost for me.

This weekend I was down in the Nagles, Co.Cork for Round one of the Polygon Grassroots Enduro Series supported by BikingDirty.com. Its always cool to race in new venues, so the two and a half hour drive down to Cork in the van with Will Powderly and Cregor Elliot was entertaining to say the least! Three big excitable kids chomping at the bit to get racing again!

With this one day format, there are three stages to hit. Your fastest time from a maximum of two attempts per stage is calculated and the fastest overall time wins. The stages were short and snappy, that demanded hardwork to shed every second off your time. ​

​Stage 2 was the longest stage with a long fire road sprint that made me grateful for the winter interval training and gym sessions I had been doing. This is where it really counts. Explosive power is needed to keep going on these sections. Starting on this stage with fresh legs was a good decision and paid off as I finished with a 10 second lead.

Stages 1 & 3 were the more technical stages with some steep shoots, drops and tight technical sections through the trees. With the rain coming in, they were starting to get pretty slick and not much time could be gained on a second run. I raced stage 1 and 2 once and as I caught someone on stage 3, I needed to repeat my run to really smash it. I would have raced it a third time as I loved it so much! Would definitely head back to the Nagles to ride this stage again.

Happy with how the race went, I certainly didn’t think I had done enough to take the win and to finish 34th overall so I was pretty surprised when handed my results. It was a great way to start the season, and is rewarding to see the hours I put in over the winter paying off. Still have plenty to work on – fitness, physical and mental strength as well as skills – you can never do enough!

Well done to all the girls I was up against, especially to Leah Maunsell and Lorraine O’Sullivan who I had the pleasure of sharing the podium with.

Massive thanks to Al Maxwell at the Bike Rack Dublin for tuning my bike which was, as always, flawless. Thanks to my sponsors for their support again this season: FLOW MTB, Transition Bikes, Kaliprotectives, ION Bike, Ride 100%, WTB

Awesome work put in by the MBCC crew down in Cork and to BikingDirty.com for a really fun race!