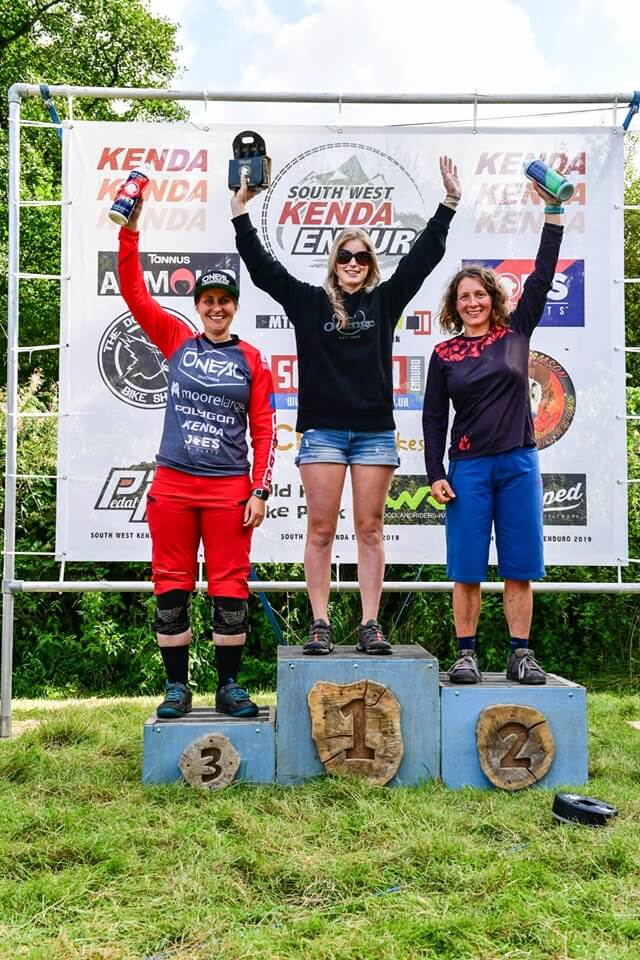 It’s been way over a week since we raced the last round of the SW Kenda Enduro series at my home woods in Grogley and I’m still buzzing from the excitement. So much so that I’m a bit scared to put pen to paper as I’m worried I’ll do it an injustice.

We generally ride Grogley on a Thursday evening; Rob, Mark, Phil, Rhys and I, but for the weeks preceding the race, we all seemed to have stuff on and struggled to get there for some pre-race training. My brother, Matt was making this the first race of the year having succumbed to parenthood this time last year. He’s an hour away so in the last few weeks before the race, it was Matt and I who, along with various other mates, tried to work out what tracks would be used. It was evident on my track walk the day before the race that where we thought we’d had comfortable lines thought out for most eventualities, they’d been mismashed to take away the home advantage. Well, most of it.

Pulling into the field on Sunday morning, it was so great to see a sea of local riders and more distant friends made throughout the series. But most of all, I was so chuffed to see Mollie and Hannah. Unfortunately in waiting for Rob, however, we missed the chance to practice together. Bloody boys and their faffing!

I always feel an unwanted pressure going into a race but today seemed worse than most. I wanted to do well in my local event, and as I ride here near enough every week, I should do well, shouldn’t I?!

Strangely, stage 1 was the track we all know as “Quarry Tipper” or to some it’s the “Enduro Line”. Invariably this is usually our first start track when we’re playing as it’s the furthest track from the main start area. It’s got lots of rooty, flat corners at the start before diving you down a series of tight, steep switchbacks. Usually I love this track but in practice, I just couldn’t get it together. I asked every local that I came across how they were riding, and everyone agreed; “not as good as I normally do!” Race pressure does a lot for my looseness on a bike, particularly in practice!

Stage 2 is a popular favourite; “Middle line” into “gulley chute”, including a double, lovingly named “The Flash”. This summer saw me jump this for the first time having tried to pluck up the courage for two years. It was great, therefore, to see that my friend, marshal and primed photographer, Alan Rabjohns was stationed right here to get the best possible shot of me…

His wife, Cath was the next Marshall point down at the fire road crossing. It was awesome on my race run to have Cath and so many people shouting me on!

Stage 3 was mostly freshly cut in a section of woods that we very rarely ride. With mostly flat corners, some of them taped to a rightangle off the worn line; I found this stage both frustrating and hard to navigate. Everything about it felt alien and wrong. I practiced it twice, raced it once and my language got more fruitful with every attempt! (Sorry)

Stage 4 was upon us way too soon. We all know this trail as “stage 5” as it was in the 2014 X Fusion Enduro race. This is the longest trail in Grogley and again, one we don’t usually ride from the top as it’s usually overgrown, particularly the Christmas tree section midway down!

It starts with flat, rooty corners one of which was an absolute pain to get right. An uphill, rooty pedal spiced up my language again, before trying to go fast through the freshly cut areas midway through the stage left me a little bit heavy on the brakes in places! However, this trail carried a lot more flow than stage three and I was having a great time coming into the steep fourth section. I may have hit “Champery Corner” slightly too fast for my liking though and managed to stay on despite accidentally endo-ing the corner out of it. The altered bottom section rode so well despite ending in freshly cut loam so that at the bottom I was grinning from ear to ear.

My race runs were definitely better than practice and I was happy to come away with second in Masters to Haby-Blu Mullane who is awesome to say the least! It was enough to secure the series win though which certainly made my day!

It was great to race with Hannah and Mollie. Their abuse always makes racing more relaxed and fun, even if Hannah did end up battered and bruised yet again! It was great to catch up with Ellie Dewdney as well, although her decision to train me down stage 3 was probably an error as I completely misnavigated the taped corners!

The racing was epic, as always with anything involving Ed and the Southern Enduro team. But what really made this race special was the amazing atmosphere generated by 30-40 people crowded round the toughest corner of the day; “Champery Corner”; heckling and shouting “encouragement” to anyone who didn’t quite make it! I’m so sorry Whip for telling them that you were on your way. (chant “whip, whip, whip” as he entered the section!) You coped so much better than I would have under that pressure! Bracefield Films really captured the atmosphere and their video is worth a watch!

I think it’s a great testament to the mountain bike community in Cornwall just how awesome this race was. Having so many friends in one area; racers, marshalls and onlookers was just ace! It was also great to have my brother back on the scene, (even if it did result in sea fareing bath toys hidden in random places in my van).

Well done to everyone who raced, I think we all did ourselves proud but huge congratulations to Rob for coming second in hardtail against some very tough competition and for also getting second in the series. Podiums are definitely becoming your thing!