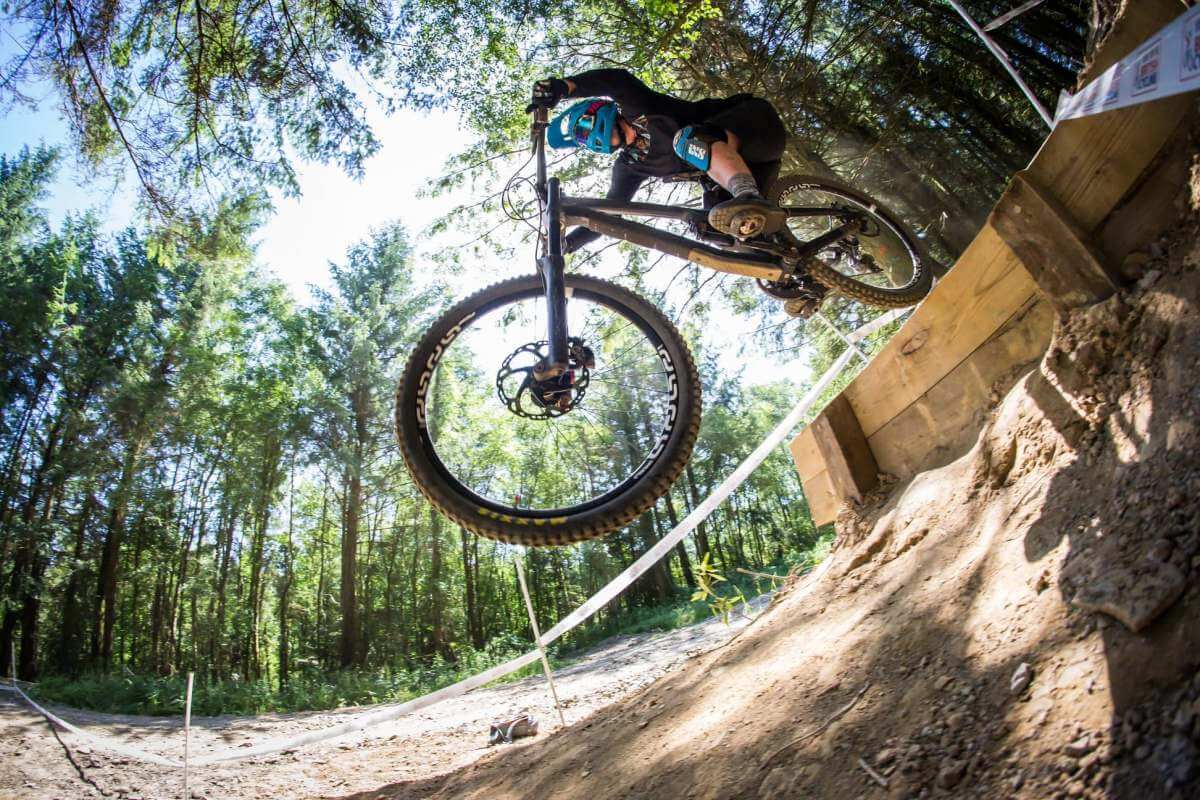 A second weekend of racing in dusty Wales sounded fab and as the weekend got closer I could hardly believe my luck. A number of people told me the track would be harder in the dry than the wet. Having seen the pictures from last year in the swamp I was pretty sure that couldn’t be true….could it?!

A track walk in glorious sunshine Friday evening revealed a steep track with split personalities! Parts were shaley, rocky and loose, parts were dusty and stumpy, others were rooty and fast between trees and then there were the jumps and drops. Each section had a sizeable new drop; they weren’t particularly big but the loose corners or tight trees after them posed a bit of a problem as you’d be carrying a lot of speed! Looking at the techy rooty sections I still wasn’t convinced that wet was easier but I was convinced wet was probably safer since it would remove a lot of the speed from the track. Still there was no way I was going to moan about another weekend of sunshine.

Saturday morning I was really nervous of the track and wasn’t looking forward to my first run but once I got on track I realised that it was my kind of track and I loved it. It was terrifying and fun in equal measures and as I got used to the track I started picking up more speed and finding flow. I somehow washed a wheel on a grassy corner and landed under my bike laughing but very firmly stuck until a marshal helped me back up.

There were a few places where lines felt tricky so team mate Emily and I stopped for a look, watched a few people and decided we needed to session Star Wars. Star Wars is a fast rooty, steep section between trees with a few line choices and as you hurtle through trees like a Starfighter pilot you suddenly begin to understand the name! We watched people crashing and felt the ground shake as one guy tried to take out a tree with his back. Somehow we missed the trees and soon got our lines sorted though far from perfect!

As we got faster and more comfortable with the track I hit a section near the bottom and took off. I hadn’t been expecting that having rolled through it every other time but it meant that instead of rolling through a rooty hole I landed in it flying straight over the bars and down the track. I lost my bar end, AGAIN, and felt a little battered but thankfully ok. I figured I should do one more run before calling it a day but after pushing to the uplift discovered the track was shut due to a nasty crash. I figured that next run could wait until tomorrow since I didn’t fancy standing in the sun for 2 hours when I could be having a cold beer. It’s all about life choices haha.

We all piled off to the river for a cold swim to wash away the dust and take away the swelling in my elbow. Bruce dog didn’t agree with Katy about it being cold and gave her a hefty shove into the river when she least expected it. Amid gales of laughter, splashes and hilarity we spent a lazy evening soaking up the atmosphere before heading back to the race venue.

Sunday showed me I had more bruises than I thought and my couple of crashes had left me feeling a bit stiff and battered. My first warm up run nailed all the lines but I felt tired and sore and decided against a second run. After sitting round for half an hour I decided I did fancy that other run after all and went back for a much more enjoyable run now my limbs had warmed up.

All too soon we were lining up at the top for our seeding run. I got on track and had a lovely run through the steep top section, the track was flowing beautifully and I blasted out on to the first fire road to a red flag. I swore heartily! My arms were tired and I really didn’t want to have to repeat my run but at least we were only 1/3 of the way in. Then my brain caught up with me and I realised someone must have had a nasty crash and my annoyance turned to worry. The ladies are a tight knit pack and it would be someone I knew. As more ladies arrived on the fire road news of a compound fracture drifted over the walkie talkies and we started trying to find out who it was. It became apparent that it was Lindsay and she was just below us on the fire road. A quick conversation and she let us know her broken collarbone was totally fine but unfortunately a bit of bone was sticking out of her leg. She assured us she was fine and took pics on her mobile fine, hard as nails that girl!

We rode down the fire road to get an uplift back to the top and joined the rest of the ladies who hadn’t started their run. We played keepy uppy with a bottle top which was a bizarre form of volley ball that saw riders launching themselves off the side of the hill in order to get that little bit of blue plastic. The boys waiting for their runs were looking at us in disbelief as we laughed, dived and generally had fun. Our attention then turned to the floss and in a similar vein to the delay at Fort William we laughed until we cried as people learnt or practised the floss.

Eventually we got a 5 minute warning to get back on track and were warned our seeding run may be our race run as they weren’t sure there would be enough time. The storm that had been building chose that moment to blow in. I had a good run down the track but was considerably more cautious than I had been. For the 3rd national race in a row I was trying to switch back on after a long delay with no food and limited water and I was not at my best. I stayed on my bike and qualified in 7th, I was pretty chuffed with that and knew I could go a bit faster if we did get a race run. I had also caught a rider at the end of Starwars which slowed me down as I was unable to pass so hopefully that would give me a few seconds too.

The rain pelted down and people started coming over the line wearing muddy smears rather than clouds of dust. I hadn’t ridden the track in the wet or looked at wet lines since the forecast said wall to wall sunshine. We were told our race runs would go ahead and I figured the only thing for it was to ride it like I would in the dry, after all most of the sections in the wood would still be dry and whilst some parts would be more slippery others would benefit from the dust being damped down.

The gaps were shortened between riders and we were back up at the top with barely a rest in the middle. As the ladies lined up the rain stopped, the sun came out and we were back to the fun! I set off and was having a bit of a wild run when I caught sight of someone in front of me. I hadn’t expected that so soon on the track, got a bit distracted and took my eyes off the track which inevitably resulted in a small lie down. It turned out Emily Deason had also had a number of lie downs so she pulled over to let me past and I continued on my merry way. A bit further down the track I realised someone else was off down the side of the hill but having learn t my lesson I didn’t look and just carried on. I got even wilder on the roots at the bottom which had become more slippery in the wet and I crossed the line with a slightly slower time but in one piece. I managed to climb one place into 6th and team mate Emily smashed it into 4th!

The track was huge fun but bit back at a lot of people, my small graze and bruises were nothing compared to the other injuries. Racing 4 weekends in a row may not have been my best idea and I’m looking forward to a weekend off the bike. After round 3 I’m sitting in 6th overall which is a lot higher than I expected at the start of the season so I’m feeling pretty pleased. My confidence and skills are improving all the time and the next 2 races will hopefully see that continue. My hero lenses have seen a lot of unexpected action this year. Never before have I needed tinted lenses in Scotland or Wales but I have to say I am loving the change!