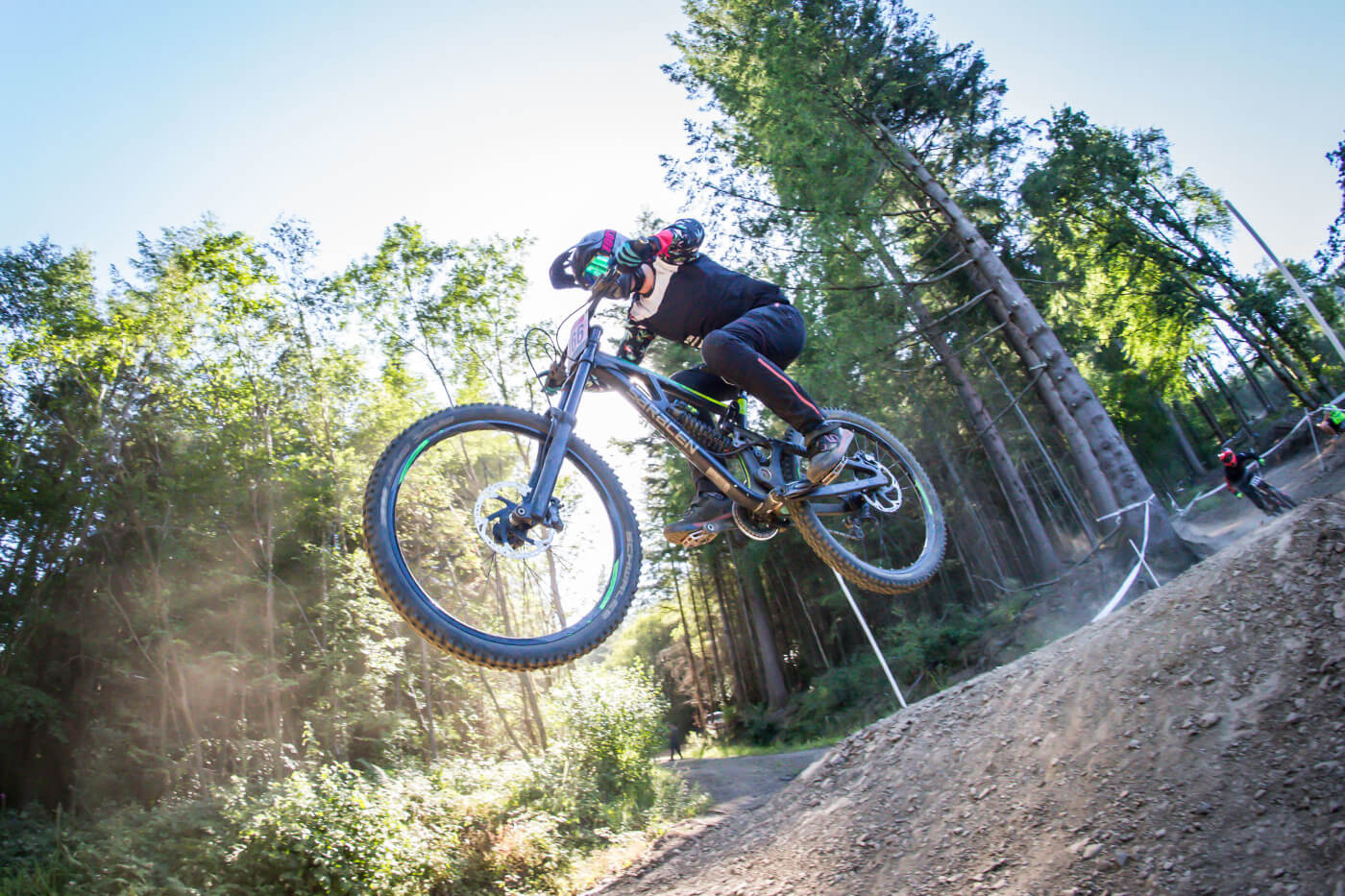 After the barely rideable slop fest with 0 visibility that was racing Rheola last year, I swore I would never race there again. And yet here I am writing my race report for round 3 of the National Downhill series at none other than, of course, Rheola.

My friends had been trying to convince me to enter all season, but I was standing my ground, however, when the weather forecast said heatwave, the prospect of riding Rheola in the dry was too much to resist so I entered the week before the race.

I had heard all the talk about the track having had a lot of work done to it, and when I arrived for track walk on Friday evening I couldn’t have been more impressed! The track had been transformed, the deep unrideable ruts had gone, and some rad new jumps and drops had appeared!

There was one big step down at the end of the first third of the track that I knew was going to cause me a bit of a mental battle of do I don’t I, but the rest of the features looked fun and manageable and pieced the original sections of track together nicely. From tight corners through the woods with loose rocks at the top in to the fast open section, then back in to the woods for roots and the infamous “star wars” which had also had a make over but still had numerous line choices and some bold hero lines for those feeling super human.

Practice as usual with teamate Becca, we were both a bit nervous about the track and knew it was going to be another tough day on a long technical track on a super hot day. Setting off on first runs down, we were immediately shocked at the lack of grip right from the start gate. None of us in the UK are used to riding in dust and it was a bit unnerving as we skidded around corners and rocks slid away from under our tyres or bounced up at us. I couldn’t complain though I really was loving it. A chilled day, spreading runs over the day so we didn’t get too exhausted and stopping to check out line choices, particularly through “star wars” and over “the big drop.” I felt a lot more comfortable and confident on my bike than I had done the week before and my body for once wasn’t hurting.

Although I struggled to keep my line through “star wars” if I hit it at any speed, being able to take it steady and get through was a million times better than crossing my fingers and hoping for the best, like last year.

I was disappointed that I hadn’t been brave enough to try the step down, and then annoyed at myself for getting so focused on one bit of the track. Another of the annoying head games of downhill racing. I knew I was capable of riding it and it would gain me quite a few seconds, but it was risky, what if I didn’t make it and got injured again. In race practice it’s different to when you’re out riding with friends, riders are constantly coming through with just a few seconds in between, you can’t stop to eye up the line, have practice runs in where you chicken out and for me I struggle to find someone I can keep up with that is happy to tow me in at the right point in the day that I’m feeling brave.

Unfortunately there were a few big crashes in practice and the track was closed for the air ambulance, so I went home happy that I had had a crash free day and maybe it was for the best I had kept it safe.

A couple of practice runs Sunday morning, still rolling the step down and it was on to race runs. As always the comaraderie between the female riders was high and it was gutting when one ladies crashed on her seeding run, injuring her leg and closing the track. Myself and a handful of other women had been red flagged just over a third of the way down the track, so after shouts of support and well wishes to the injured rider, it was a pedal along the fire road and thankfully the uplift Land rover picked us up and took us back to the top.

With the track closed for 2 hours it was a long wait at the top with not a lot to do and a lot of bored and hungry riders. After a catch up on who was wearing what kit and body armour and who liked what, it was on to games to occupy ourselves, throwing bottle lids between us, and Ellie Dewdney leading the “floss” masterclass. This just about kept us smiling to seeding runs.

The rain arrived as we set off for seeding, not enough to change the ground conditions too much yet, but a splattering of rain drops on our goggles and a change in temperature. Seeding run went OK, a few mistakes, a few stalls and missed lines but I stayed on the bike and seeded 5th.

Some heavy rain showers later and time for race runs, it was getting late in the day and energy and concentration levels were dwindling.

I had tried to assess the way the track might have changed from the rain, the open dusty sections would have more grip but the rooty sections in the open would be slippy, under the trees was still pretty much the same.

I think everyone was a bit tentative on race runs, not really knowing how much grip there would be. I tried to stay steady and relaxed on the bike to get smooth lines, and it paid off, apart from clipping a tree and a couple of small mistakes I had a relatively clean race run and finished in 4th, just 3 seconds off 2nd. A much better result than I was expecting and a completely crash free weekend. Well done to teamate Becca who finished 7th after a few mishaps and mechanicals over the weekend!

As always massive thank you to my sponsors Flow MTB for all of their support. And healing vibes to all the riders injured on the weekend.