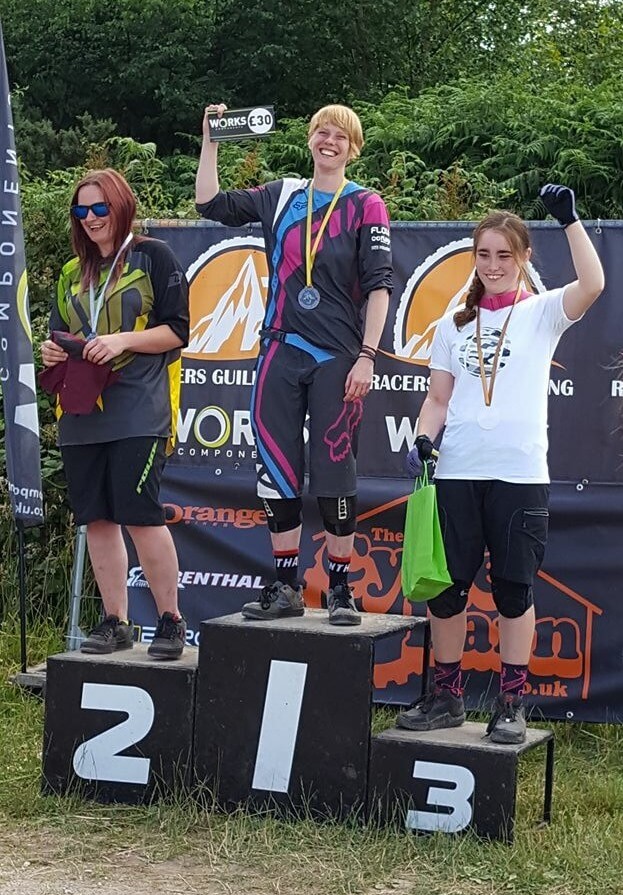 Racers Guild is a West Midlands based club with a focus on Downhill MTB who organise downhill races and events at Stile Cop, Cannock Chase. Picking up her second first place of the series, here’s Kate’s race report.

This weekend racing was all about loose dry dusty tracks, sunshine, crazy bike friends and bags of fun! It’s the 3rd round of the Racers Guild Summer Series at Stile Cop – racing New Line.

New Line is a track that six months ago I looked at and thought “I wish I could ride that”. I was a bit dubious about entering the race but I also knew how chuffed I would be to ride it let alone race it. So what the hell I put my name down! Got to do it now haven’t I!

New line is a well thought out ace track with bags of fun – if you can master this track fast it’s pretty awesome to ride and will sure put a grin on your face! It’s over on what’s know as the dark side of the hill and starts fast and narrow into a right hand bend with two jumps switching you left then right. With the ground widening you then hit a rock garden with more jumps to follow. Heading into the tree’s the terrain becomes very steep and rooty with tight twists and trees ready to pounce at you. There was definitely a tree my my mate Paul’s name on! You then hit another jump into a bomb hole ready for a sizeable, fast drop that throws you between tight trees; this section’s really fast with a pinball feel (my favourite kind of track) all the way to the finish.

With the ground so dry the track was very loose and wild and made for some good entertainment. It was great watching some of the super fast lads down the track. Their speeds were immense, I’d wince as they flew over the drop into the tight trees hitting the ruts and roots with puffs of dust flying up, it was certainly giving the spectators a lot to shout about.

My practice runs went well and it was soon time for the race runs. With three girls entering the race I started both my race runs sandwiched between Ellin and Pip. I was slightly more nervous than usual, I needed to be on the ball to get a good time on this track – I was loving the features but they also put some fear in me; a good fear – the one that makes you super happy and bounce around when you’ve completed it.

I set off on my first of two runs and from the off it wasn’t flowing as I’d liked – I lost my footing near the top after a slip so I fell slightly short on the first jump thus loosing speed for the second. Placing my foot back on my pedal it was firmly stuck to my pins in a rather awkward fashion, I hit the rock section with my foot sticking out like a duck. I remember thinking this could end rather badly. Having survived the rock garden I adjusted my footing and headed into the trees. I was taking the inside line over roots to make the next corner open up. Taking this option means a very tight steep turn into the roots . Again I’d nailed this down to a tee in practice, but managed to mess it up in my first race run. I didn’t dab but I was balancing stationary for a moment or two which was quite hairy when it’s so steep! Letting off the brakes I got my flow back and hit the drop at a decent speed which set me up for a good final section. Fast rough sections are one of my stronger points I’ve realised so if I struggle on one part of the track I know if there’s a section like this I can claw some time back. I came in with a time of 55 seconds which left me in 2nd place. I was 00.1 of a second from first.

Time to get a grip for my second run. With the nerves I always tense up on the bike for race runs; not letting the bike move around under me, I never ride as well as when I’m shredding on my own. I’m hoping in time this will ease and I can imagine there’s loads of riders that react the same when racing. I told myself the second run was just a practice, like my behavior would reflect that! So off I went on my second run carrying better speed into the first turn and hitting the first jump a lot better I knew I would have a cleaner run. I hit the rock garden like my life depended on it to a loud cheer from the spectators. With that spurring me on, off I went into the trees and nailed the inside line weaving around over the jump and into the small bomb hole – I was a bit wary of the speed I had going into the drop, so I buzzed my butt off the back tyre to my amusement and probably everybody else’s! The last section was guns blazing again better than my first run. I came in with a time of 53 second and was chuffed to bits to take the win with that!

As I’ve said before I know I can ride faster and better when I’m relaxed on the bike and I’m hoping in time I will learn to ‘ride’ my bike in race runs and push for better recorded times. Riding this track has definitely improved my skills and I’m constantly learning and meeting more great people.

Massive thank you to Mick, Harry and the team, fab day as always and smiles all round. They made a great effort to make the track rideable for most levels of experience – albeit a bit steep you could even roll the drop if you took it steady, which was great news for those that wanted to ride the track but had a hang up on the drop. Can’t wait for the next round!

Thanks to Flow for the continued support.