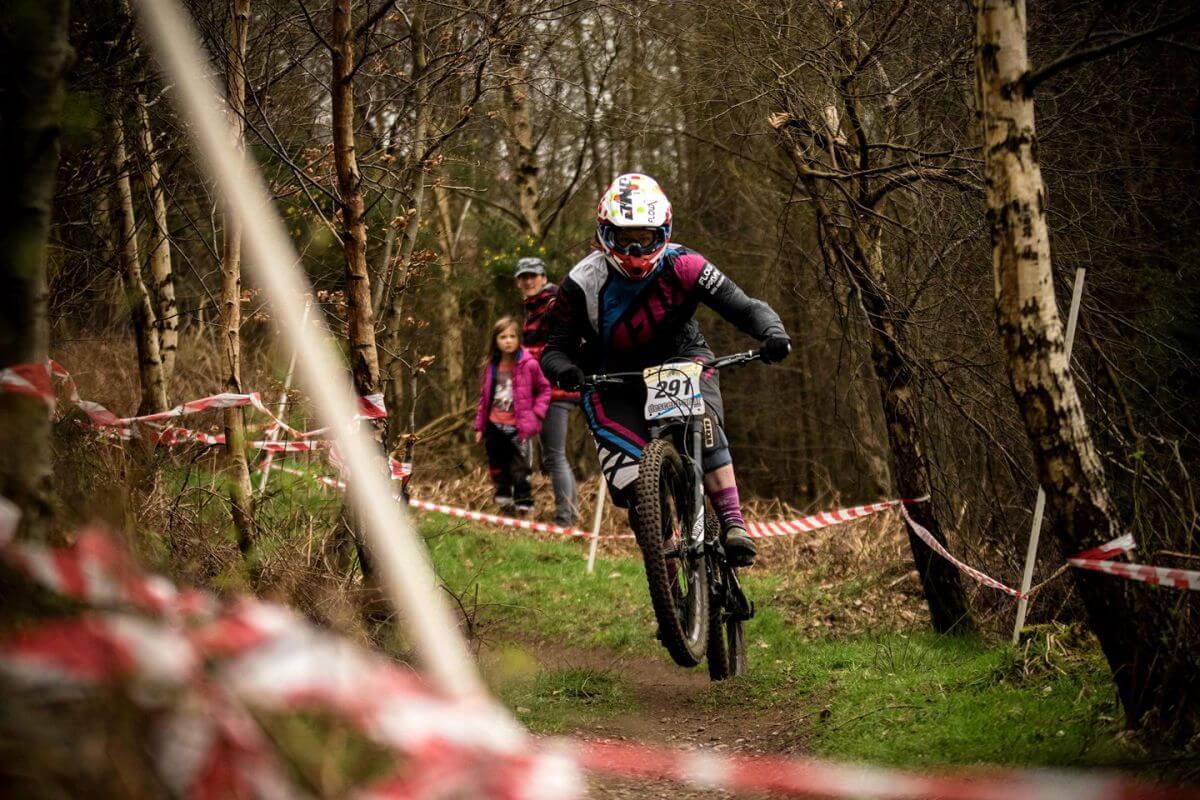 Flow MTB riders Kate and Rebecca entered the third round of the 2017, Racers Guild at Stile Cop

The weekend saw Spring racing kick off in style. It was the final round of the Racers Guild winter series at Stile Cop. We’d previously had snow and rain, what we were lacking was a bit of sunshine which the weather gods finally delivered on Sunday! Yes you read that right. I was racing and it was sunny.

Roll back to Friday and a drunken night with friends, eating good food and gossiping. Roll back a little further to 2 weeks before when the road bike testing I was doing got postponed because of stormy weather. This saw me agreeing, in a moment of madness, to complete the road bike test on Saturday 18th March. That’s right the day before this race and the day after a long overdue catch up with friends. Diary unplanning at it’s very best.

Friday’s outrageous late night was followed by an equally outrageous early start to drive down to the Mendips. Malvern had been blessed with beautiful sunshine so I felt excited driving down the M5 until I saw the looming black cloud that was Somerset. I pulled on my disco slippers and waterproof for a day of riding into a headwind and doing hill reps up the side of Burrington Combe. The day was full of banter, friends, challenge, pretty kit, shiny bikes and hurtling downhill over wet tarmac. If you replace tarmac with mud it sounds a lot like mountain biking!

I rushed home, packed my car and then the tiredness that saw me trip over my bike and cycle in to a bin on Wednesday (yes really, a stationary bin that’s always been there!) reared it’s head. My team mate Kate talked me into dragging my ass off the sofa and into my car tempting me with tales of the fun I would have. A late drive back up the M5 to my Mum’s earnt me a cuppa and an early night.

I woke on Sunday morning to the roar of gale force winds and a bright light coming through the curtains. Could that be sun? Yes it was and despite being tired the lure of the sunshine was strong after a winter of grey rain and brown sludge. I bounced over to Stile Cop, walked the track, avoided getting hung on the race tape that the gale was happily blowing around like streamers, bounced a bit more and was soon feeling my excited Tigger self.

The sun shone, we laughed, we met new people, we helped a new racer down the track and we seemed to have all the time in the world to practise. The track was an exciting mix of corners, a very narrow rut and some shiny pebbles that had the annoying habit of making tyres let loose at unexpected moments. I had some issues with a pesky stump that kept jumping out at me no matter what line I took but I soon learned that I could bunny hop after all and then it became fun. We whooped down the track and I led Kate astray from her line into my tree stump, she was delighted. I think that’s what she said anyway…

The beeps started and the nerves trickled in. I waited while the marshals tamed the tape which had once again blown free to flutter in the air. The beeps went again and before I knew it I was hipping the first whoop, hopping my tree stump and sprinting for the line. Sitting in second I felt I could shave a few seconds off but first I needed to cheer other racers on and get cuddles from my friend’s puppy. It is all about having the right priorities!

Run 2 was delayed to enable new racers to get a clean unpressured run with maximum cheers and support from the side lines. Soon I was on track; I shot through the top section and then squealed as my front tyre washed on a pebbly corner which turned to garbled laughter as a shout came from the crowd “stop screaming and pedal”! I got on the pedals, hopped my tree stump which moved yet again on to my line and came in just over 1 second faster to retain 2nd place. Kate put in a stonking run to get her closest time to first place so far this year.

Podiums, prizes and pics bought the series to a close. This series has been friendly, welcoming and great for beginners whilst the short techy tracks and competitive entries gave more experienced racers a challenge. I’ve made new friends, learnt new skills and had a load of fun.

Next weekend I’m playing netball and racing at the Forest of Dean. No rest for the wicked, not that I would have it any other way. Although if I could avoid riding in to bins this week I think that would be a great start!