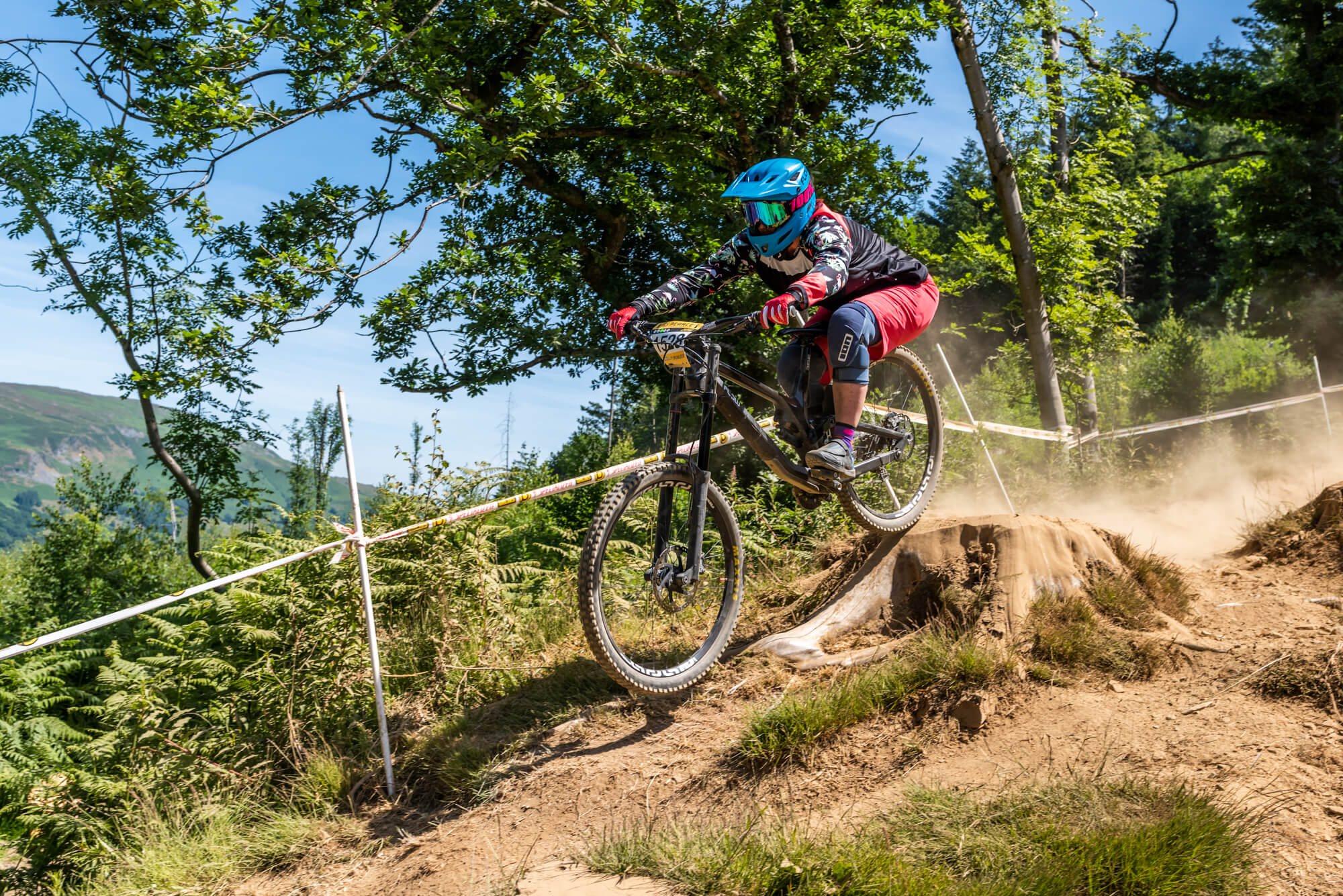 As Pearce round 3 approached the weather forecast turned into a line of round yellow balls with double digit numbers starting with a 2. I reloaded the weather forecast certain I had selected the wrong place and maybe substituted LLangynog for Lisbon or some other hot place. It said the same thing and I realised we were in for a scorcher!

I had only ever ridden Rhyd-y-Felin (or Bala as it is more affectionately known) in the slop with mud up to my eyeballs resulting in photos showing me plastered against numerous trees. It is a steep technical track and I could barely believe I’d be lucky enough to finally ride it in the dry. I stubbornly packed my waterproofs just in case and set off on the long drive to the Tanat valley, North Wales.

Friday night’s track walk was bathed in glorious golden sun light accompanied by many exclamations about how amazing the track looked. I had only ever ridden the safe lines previously so we ummed and ahhed about options and how brave we were feeling. One thing was sure, the loose dusty corners were still going to be slippery but the roots and tree stumps became jump options and lines rather than things to avoid!

Saturday dawned hazy and a little cooler but promised to heat up once the cloud burnt off. The midges were still out in force until suddenly the sun cleared the cloud and they all hid in the shadows. Riding with team mate Emily and Amanda from Ladies Do DH we set off for a first run down the track and it was every bit as steep as it looked. We took it cautiously, scoping lines and whooping as we drifted corners in the dust. We were moving faster than expected due to the gradient and ran past several of our line choices, we needed to pay closer attention in our next run!

We tightened our lines, stopped and checked options where needed and identified markers we could see whilst coming in at speed through the dust. Slowly the track came together and we picked up speed until we were rattling through tree stumps hoping we made the next corner.

Our lungs clogged with dust, the sweat rolled down our backs and we struggled to stay hydrated but what a day! Everyone was buzzing and rosy cheeked as practise drew to a close. A shower provided a welcome opportunity to wash the dust out of my eyelashes while other people sought refreshment in the stream below the field. The campsite was buzzing with BBQs, chains of people doing wheelies and a long jump competition on a hastily built wooden ramp. The light night and festival atmosphere meant less sleep than I planned but as we chatted backlit by a stunning sunset I realised this was one of the best things about racing; bikes, tired grins and friends.

Sunday morning came too soon but the wide blue sky and baking sun were already promising more dusty fun. The first run of the day told me just how much hard work the track was as my arms screamed from the first corner and my hands rapidly forgot how to work. Yesterday I had felt fine but apparently the track had taken more out of me than I recognised. I wasn’t alone and everyone was all too aware of their arms and legs as the track dealt out more punishing descents. I stretched and hoped my gym work had prepared me; after all I was used to working hard with screaming muscles! My hands were a little more of an issue as I needed to be able to hold on…. The race beeps in Fort William had magically rejuvenated my tired limbs/scared me enough to not notice it so I hoped that the same would happen here and stopped worrying!

My nerves kicked in as we waited at the top for our race runs but oddly I was nowhere near as nervous as normal. I couldn’t wait to get on track and start blasting through the dusty blown out corners. I had a good start off the line but got a little carried away in a wooded section where the change from bright sun to dark woods meant I lost all sight for a second and rode into a tree. I knew that tree was there as I’d hit it whilst sun blind a few times that weekend but a hasty dab and a loud expletive saw me on my way haha! I was a little ragged through the middle section, slid straight past one of my lines and clipped another tree on a tricky off camber a bit further down. I missed my line into the field and couldn’t get back on it so ran all the corners wider than planned. I was super surprised to cross the line in 3rd place, my best result this year! A few others had crashed so I knew I needed to go faster in my second run but I was so happy with what I’d managed so far.

I hid in the shade, drank as much as I could fit in and laughed with friends. I lined up for my second run aware I needed to avoid the trees, ride more smoothly and take a few seconds off if possible. Normally that results in me tearing out of the gate and riding like a loon before crashing out but this time I hit my lines, missed the trees and made it over the line 6 seconds faster. A couple of others took even more off their time and I dropped into a happy 5th.

At the first Pearce of the year in March I came last and 11.5% off the fastest time in my category. This weekend I pulled that gap back to 8% and finished 6 places higher. I’ve been training hard to get back to form after a huge crash last year and although I expected to be slow at the start of the season it was still a shock just how slow I was. I’m slowly creeping back up that board as confidence, skill and strength return. I’m loving my bike and I can’t wait for the next race this weekend. It’s in South Wales and the forecast is showing a similar set of yellow balls! I’m still going to take my waterproof but I’m going to take my hero lenses as well, you never know when those mirrored tints will be needed!