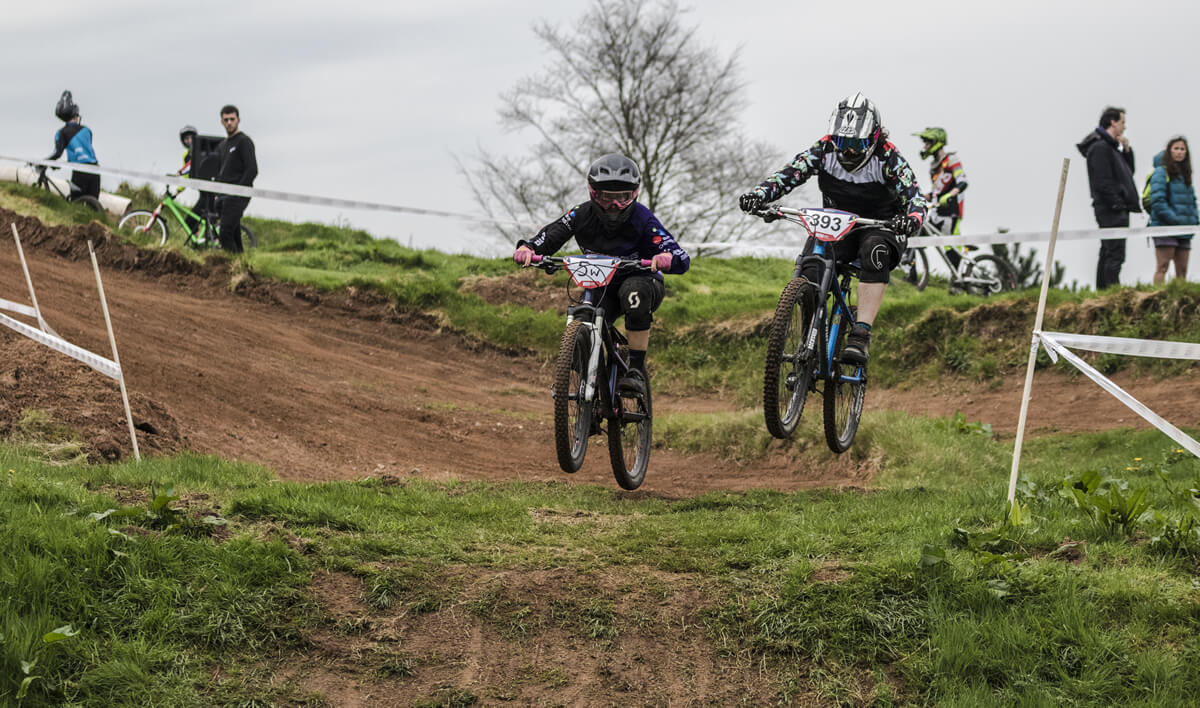 Flow MTB rider Heather took part in the second round of the 2018 Schwalbe British 4X Series at Harthill. Making the most of her track speed and overtaking manoeuvres allowed Heather to gain enough points for the ‘A’ final and 3rd overall, here’s Heather’s race report…

For those of you who don’t know me, I have been living in a van for the last 3 years but moved into a flat a week ago. As such it was the first time in years that I’ve actually had to pack before heading to a race! Despite this I was confident I hadn’t forgotten anything as I set off on the glorious sunny drive through the Welsh hills. Arriving at Harthill I was greeted in style by Hannah Escott and was soon parked up chatting to the 4X family.

It wasn’t long before I was out on the track getting some practice in. The track was dry, sandy and loose, so it was fun getting a bit sideways at times and dialing in those racing lines. It’s a great track for racing with a short start straight into a first corner with an inside and outside berm followed by a short table and then the 2nd corner with 4 berm options, decisions need to be made quickly and the adrenalin is definitely pumping when you line up in the start (those corners are renowned for carnage!).

The next morning we were all looking at the sky and the weather forecast to work out when it was going to rain. The showers early in practice damped down the track a bit making it run much faster and before long it was time for racing. Numbers had improved in the women’s category and with 8 of us points from the 3 motos would decide if we were to be in the ‘A’ or ‘B’ final. Yet again my gates let me down, it’s so frustrating having nowhere local to practice. Luckily my track speed and overtaking manoeuvres allowed me to gain enough points for the ‘A’ final alongside Megan Wherry, Courtney Abiss and Josie McFall. Out the gate and into the first corner, Megan and Courtney went inside and I followed Josie around the outside. Into turn 2 and all three of them took the lower inside lines, this played to my advantage so I swooped round the outside staying clear of trouble and maintaining my speed into the next table where I managed to overtake Courtney and get tight alongside Josie. I kept looking for gaps but Josie was having none of it and I had to settle for third. In the ‘B’ final Hannah Escott took the win ahead of Julie Morrisey, Rachel Powis and Kaitlin Turner.

All in all it was yet again a fun filled, adrenalin fuelled weekend of great racing and catching up with friends. I’m gutted I won’t be able to attend the next round due to finances and final exams but I can’t wait for Rd 4 at Afan.