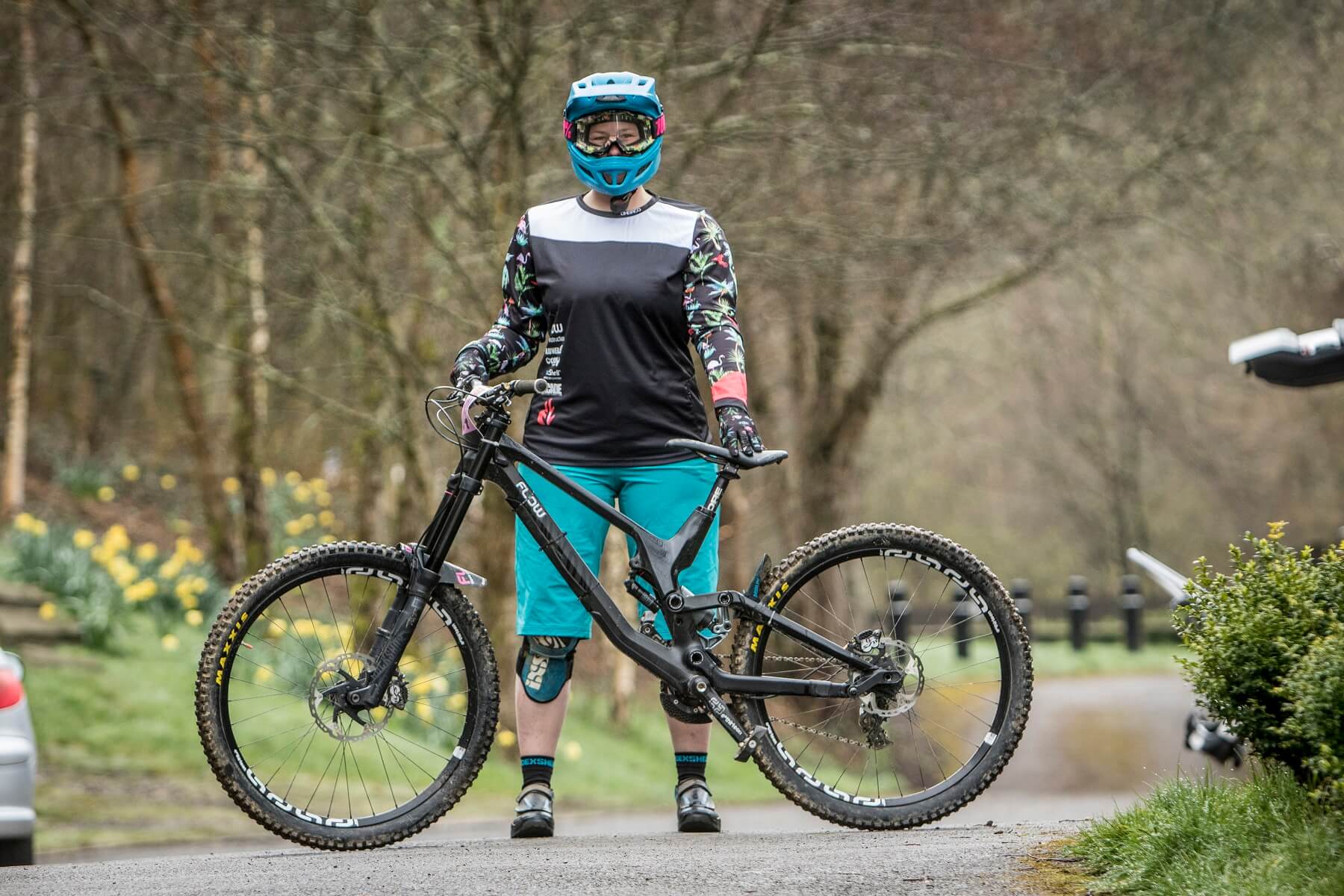 Almost a year on from breaking her collarbone Flow MTB rider Rebecca needed a target for 2018. With gym work and rehab going well and the desire to race some new venues she took the plunge and entered the full 2018 National Downhill Series. Round one took place at Cwmcarn and kitted out in her new DHaRCO race kit Rebecca put in a solid race run picking up 7th place, here’s her race report

I entered the National Downhill Series a few months ago having decided that I was brave enough to step up to nationals this year. My gym work and rehab were going well, I needed a target for the year and I wanted to race some new venues. As the start of the series got closer I began to wonder if I’d made the right decision. I was struggling to get it together on my bike and lacking in confidence, a national series didn’t seem like the best place to sort that out!

After a shocking race at the first Pearce round of the year 2 weeks ago I didn’t have high hopes for the first round of Nationals. I went out riding with friends in the 2 weeks between and found myself having fun and feeling a bit more confident but I couldn’t help but feel that a nice local race would have been a better choice. I rode at the race venue with my mates the week before and found myself loving the track and feeling excited about the race. The huge jumps at the end were terrifying; too much kick on them to squash easily but the second you committed to them they sent you sky high. I had no clear plan for them but figured I’d sort it out in practise…..

I packed my kit to head over to South Wales feeling more optimistic than I had in weeks. As I was leaving a message from the lovely Anita at Flow Mountain Bike Apparel made my day! She had managed to get 2 jerseys printed so team mate Emily and I would have new race kit for Sunday. The weekend was looking up!

I did my track walk, the main line was taped with all options open and no new lines so I didn’t have anything new to learn. The previous week I’d crashed out on a tiny root slamming in to a tree stump and was super relived to see the stump had been removed leaving a soft earthy bank. The tunnel was slippery in the damp and I figured in the wet it would be even more exciting but who doesn’t love a 90 degree bend with a concrete wall to hit?!

Having broken my big tent I was spending the weekend in a small mountain tent and my Corsa with Charlie the adventure dog, my bike and all my race kit. The forecast was wet and lack of space was going to make logistics very difficult. For some reason I didn’t think about taking a gazebo or asking a friend for a bigger tent. Oh well once I had moved things around a billion times I settled down to a restless night listening to the rain and feeling increasingly nervous.

Practise day dawned wet, rainy and very grey. The track had a river running down it but Emily and I set off for a very quiet first few practise runs while most people waited for the rain to stop. We may have gotten very soggy but we had an almost empty track, no pressure and no flags to hold us up. With the first run under our belt I was still apprehensive but I was loving it. The track was holding up well in the rain, I’d made it down the entire track with no mishaps and I was even riding confidently. Run 2 was going very well until I got bold and hopped a slippery little root that had caused me issues the previous week and slammed in to the bank. Covered in bright orange mud I got back on track before stopping on the fire road above the main jump line.

We tried to set off but I couldn’t clip my left foot in and realised something wasn’t right. I’d managed to rip a bolt out of my cleat spinning it round so I opted to descend via the red xc trail. Emerging into the race pits on the xc trail with my full downhill kit on got me some strange looks haha. Thankfully I had a spare set of cleats in my tool kit so after faffing with muddy shoes and bolts I was ready to go. Or not. I’d also managed to rip my bar end out but once again my trusty tool kit revealed a spare set of grips. One small innocuous spill had broken my shoe, grip and ripped my trousers and the day had barely started!

Back on track I met various people with bright orange muddy smears down their right side and knew that root had claimed them too. A few others had lost bar ends in there as well so if you’re ever in need of a bar end at Cwmcarn there is a bank studded with them about half way up!

As practise started in earnest so did the red flags, we didn’t get another clean run down the track as the jumps at the end spat off rider after rider making even the pros look like amateurs. Watching people hit the jumps I realised I wasn’t the only one struggling with them and far better riders than me were nervous of them which felt reassuring and troubling at the same time! A number of people broke bikes and body parts and the photos were epic. The uplift was a mile away from the finish line and with all the red flags it was difficult to get many runs in before our time was up.

I collected my new race kit that evening and had a nice relaxing time before getting a great nights sleep. This is unusual as before a race I don’t normally sleep but when I woke in the night with cramp and tried not to scream down the quiet campsite I realised I must have messed up my hydration. I thought I had drunk enough but obviously not, rookie error.

I woke up to another dreary day feeling rough and cross with myself for not drinking enough. I opened my box of new kit to discover a pair of Dexshell waterproof socks and couldn’t stop the huge grin that spread across my face. Waterproof socks may not sound exciting but with the prospect of putting on soggy wet shoes, clean waterproof socks is a game changer! The uplift queue was massive but thankfully I got a great practise run in and opted not to do another as I couldn’t face the push to the uplift or queueing in the cold. The track was quickly red flagged leaving an even bigger delay and I knew I’d made the right choice.

Suddenly it was time to make our way to the top for the qualifying run. At nationals you only get once race run plus a qualifying run to seed you in speed order for the race run. I had a great run down, I was a bit ragged at the top, hit the wall in the tunnel for the first time all weekend, crashed on the stupid root again but I came across the line with a time I was happy with seeding me in 7th place! I had managed to get over the jumps, not with style or panache but safely. Qualifying was eventful with several riders having big crashes leading to more red flags, hospital trips and delays. It was going to be one of those races where anything could and would happen and staying on was what would make the difference.

It felt like we should have ages until our race run but with a long walk to the uplift it was soon time to go. We arrived at the top to a huge queue. The track was closed again, riders were coming up for re-runs having been red flagged on their race run and it was clear we were going to have a long wait. The banter started to flow and before long my cheeks were burning from laughter and I felt like we were out for a day trip not a race. After 1 hour 25 minutes it was time to get ready but I couldn’t have felt less like racing. I was sleepy, relaxed and not at all ready for a race run! Despite drinking lots I still had a headache and the wait at the top plus all the laughing hadn’t helped.

As I waited at the start line the adrenaline kicked in and I knew I needed to try and stay smooth on track. After a long wait I was finding it hard to focus and knew that normally this meant I would ride like a loon until I hit something and managed to calm it down. This race was no exception and as I hit the first tree stump and missed my first 3 lines I had to make an effort to slow down and smooth it out. I made it down the steep rocky top section, over the root and into the jumps. I still braked hard and squashed them but I made it over the line after a mainly good run and was ecstatic to finish in 7th. Emily had been riding so strongly all weekend and managed to smash it into 4th place!

Race runs weren’t without hiccup though as the track had claimed yet more riders with some unable to race and some coming across the line with the tell-tale signs of a crash. Racing finished late and it was only down to the amazing marshals, medics and commissaries getting racing back on as quickly as they could after each crash that we finished at all. Watching the elite riders send it over the jumps and come down at warp speed was awesome! It was an eventful weekend.

It turns out my sore head was the start of man flu which I am currently nursing in my onesie curled up with my dog. Thankfully it waited until I was home to kick in so maybe I hadn’t messed up my hydration after all.

So all in all I’m super chuffed with how my first national went and I am starting to love my bike again. I even managed to overcome some of my fear of the jump line committing to the smaller ones and not braking too much into the drops. My gym work is paying off and I managed to suck up heavy landings and a rough rocky course with only minor shoulder issues. The banter and support from other ladies was incredible and the field of 13 was the largest senior women’s category anyone had seen at nationals. I’ve got a few weeks off to re-stock my tool kit, get over my man flu and find some fitness as the next race is the massive Fort William track in Scotland! A place of legends, the longest track on the circuit and with a whopping 11 ladies entered it’s sure to be a good one!