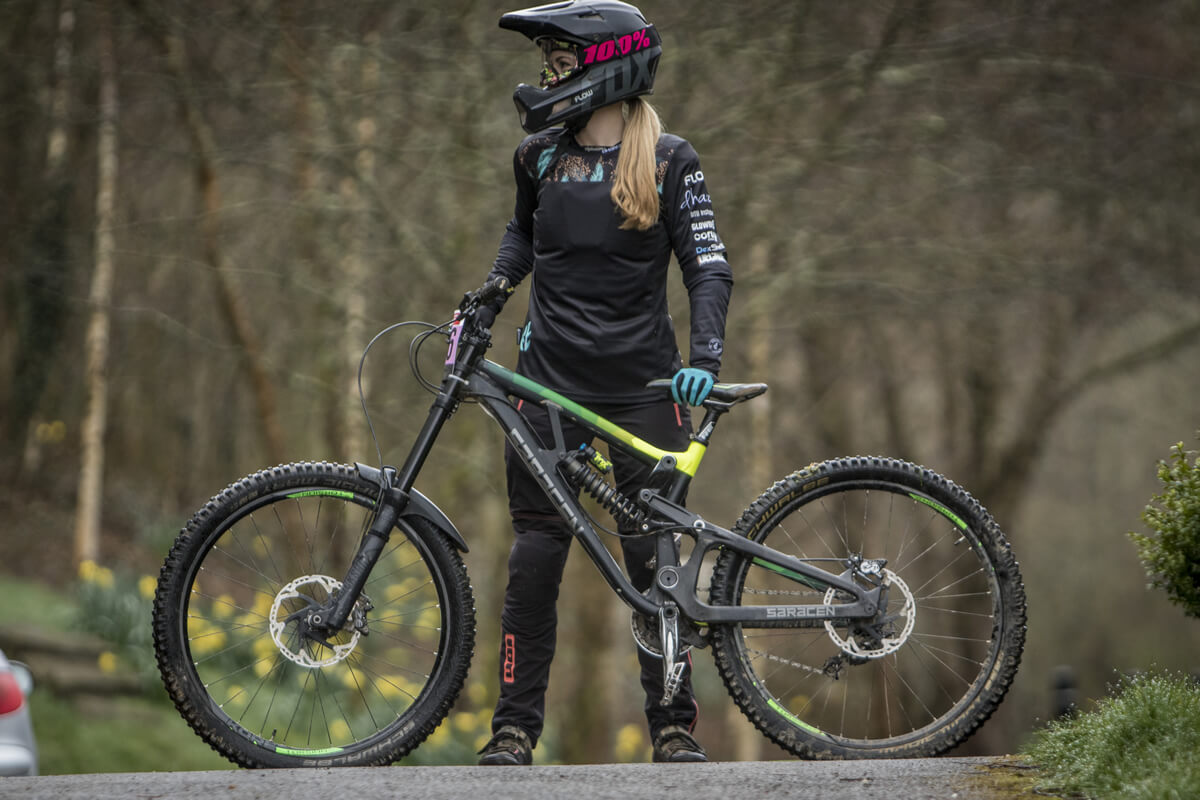 Round one of the National Downhill Series was Emily’s first national race.  In a tough female category Emily put in an impressive race run taking her into 4th and a place onto the podium, here’s her race report

Writing my race report for round one of the national series at Cwmcarn I’m still grinning!

For my first national race I had no idea what to expect and quite frankly I was terrified. Round one was organised by Welsh Gravity Enduro and held at Cwmcarn. Looking at the womens category ahead of the weekend it looked like it was going to be a tough race with lots of very speedy ladies!

I turned up on Saturday morning for practice feeling like I had bitten off more than I could chew and maybe I wasn’t ready for this level of race. It was hammering it down with rain and we were parked way up past the pit area, so by the time I met team mate Becca and then pushed up to the uplift I was soaked through and nervous. The rain however kept a lot of the riders away first thing, so Becca and I managed to get a few runs in with a relatively clear track, just what we needed to get the nerves under control and suss out the track.

It was a long uplift and push up to the uplift so it took a fair while to get a run in so there was no real risk of over doing it on practice day!

Over the day there were a lot of red flags on track and a few friends had some big crashes on the first of the bigger jumps in the bottom section and the tight corner in to a narrow tunnel mid way down the track was claiming a few victims. For me, after my last race, pushing it too hard and crashing loads in practice I managed to keep calm and in control and practice went relatively well, with just one little set of sniper roots that occasionally sent me sideways. Thankfully the stump, that I had hit after crashing on them on an uplift day, had been removed, which drastically reduced the consequence.

After my last practice run I walked back up to the jumps and it was incredible watching the elite riders coming down and showing us all how it’s done, particularly the girls Tahnee and Katy styling it up on the hip!

I finished the day beating myself up that I hadn’t plucked up the courage to hit the big hip on the jumps line but promised myself I was being silly and to go for it in practice on sunday!

Sponsors Flow MTB made the long journey over to Cwmcarn to see Becca and I and bring us our new kit which made me really excited for racing and representing them!

Sunday morning I was nervous again, but despite not managing to secure myself a tow in, I managed to send all the jumps first run down, including the hip, so I was buzzing!!

Seeding run, I was super pleased the sniper roots didn’t get me but unfortunately the rider in front had a crash so I could see her from half way down the track and was gaining on her as I hit the jumps section. I flew round the corner in to the biggest jumps and caught her up on the take off, thankfully managed not to land on her, then slammed the brakes on to pop on to the second table then pedal like crazy to sneakily undertake on the line choice on the hip. A few of the other girls had issues with seeding runs, red flags and flat tyres so although I seeded 4th I knew it didn’t mean much!

We went up for race runs at our allocated time but big delays at the top meant we waited around for a long time, thankfully its a fantastic bunch of girls racing and the stories and laughs kept us all in high spirits.

It must have been 5pm by the time we set off for race runs and it was hard to convince my brain we still had a race run to do! I set off like bambi taking his first steps, missing my lines and and stalling all over the place, telling myself to concentrate and knowing that if I could keep it together to the jumps, autopilot would kick in and take me to the finish line. Fast open sections and jumps seem to suit me better than the twisty tight corners. I survived the sniper roots and hit the jumps, there were loads of spectators including a whole bunch of my friends who had come to support, I could hear them cheering and it felt amazing! Crossing the finish line I went in to 3rd, knowing that I had the other riders who had beaten me in seeding still to come down. As all the riders finished their runs there were a few mishaps for other riders which left me in 4th!!

4th in my first national race! A podium finish, I was over the moon! I really didn’t expect such a good result! Team mate Becca also managed a fantastic result, finishing in 7th, showing that her confidence is returning following injury!

Aside from seeing a few of my friends go home with injuries, it was a great weekend with a good atmosphere! I was happy to hold my own in a tough female category, and loved the experience of racing the same track as some of the best riders in the world. I’m now excited for Fort William and the rest of the season!

Massive thanks again to sponsors Flow MTB who not only provided us with amazing kit, but also drove all the way to Wales to make sure we had it in time for racing!