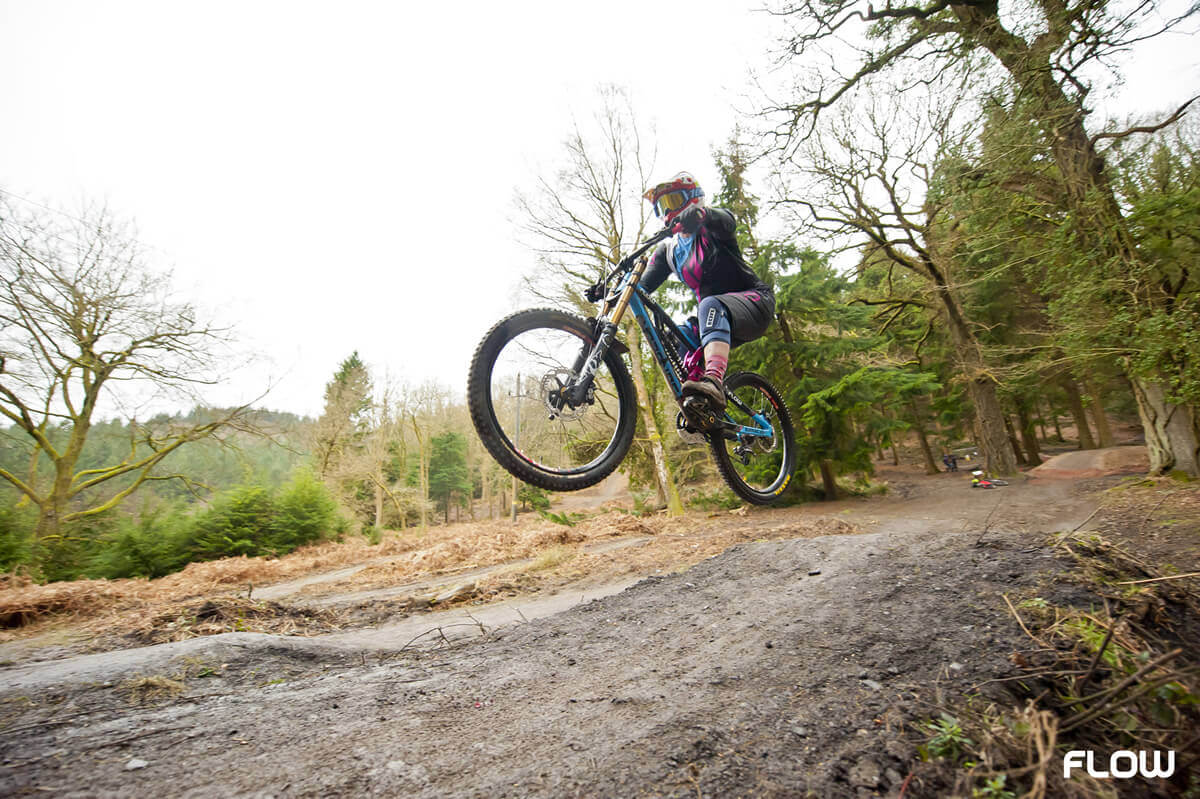 Flow MTB riders Rebecca, Kate and Corinna entered the second round of the Mini Downhill series at the Forest of Dean

The mini downhill series is now in it’s 10th year. On a wet Sunday morning in February on a track slippery enough to test any rider Rebecca joined 19 other women entered across 4 race categories, here’s her race report.

After the Racers Guild race last weekend and with the Mini Downhill looming this weekend life was starting to feel a little bit busy. Add in a netball match on the Saturday and lots of travelling with work and it was starting to feel insane. Somehow I needed to fit in race practice Friday, netball Saturday lunch time, a team photo shoot Saturday late afternoon and a race on Sunday. Ok, er maybe, right?

Roll forward to Friday and I packed up my work early afternoon ready to get out on sunny dry trails for race practice that afternoon. The sun was shining, the sky was blue and the track was dry and loamy with a little dust, perfect!! With the birds singing and the daffodils flowering it was feeling like Spring.

I met up with my mates and we spent a happy late afternoon bashing across roots, picking the fast racing lines over tricky roots and discussing possible easier lines if the track was wet on Sunday. With little puffs of dust floating around, a wet track on Sunday seemed a world away and pretty unlikely. Rain was forecast for Saturday but it had rained yesterday and the day before and yet here we were standing in the dry loam. Sorted. We spent time sessioning the jumps at the bottom, I finally found the balls to hit the double and despite 50:50ing the landing I was feeling pretty pleased with my practise session. Tomorrow I planned to walk the track after my team photo shoot to confirm that they had taped where we expected. I went home to wash my Miranda so she was shiny for her photo shoot.

Saturday and netball was a fast and tough match but it was done and I could get on with the photo shoot. I drove over to FOD in the sun but as I got closer the predicted rain cloud was hanging over the top of FOD cutting off the tops of the hills. Hmmm. I soon forgot all about the drizzle when Anita from Flow MTB came over with a huge bag of goodies, hooray my team kit was here! I got changed and set off up the hill admiring my new kit. The lilac ION knee pads were just beautiful. I know some ladies don’t like that ladies kit comes in lilac but wow, why would you choose black when you could choose lilac!?

I spent a fun hour whooping around with my team mates, posing and generally admiring how cool everyone looked. It was great to meet the rest of the team and finally put real people to their social media accounts. With the team shoot done, the rain was really coming down and various friends had let me know the track was taped differently to normal but running really well. I figured a run or 2 down it checking out the new lines and we’d be fine. Yeah that really is what I thought!

It turned out that the track had other ideas. It was wet. Properly wet. Not only did I need a new line in 2 places due to the way it was taped but a billion new roots were uncovered and shining through the slop. Almost everyone else had gone home so at least it was quiet and wet. First run in and down I went sliding on my ass through the mud. Second run in and again down I went. Laughing through the mud and rain a friend showed us different line choices that had appeared through the day and after a play around I’d sorted my lines and was feeling a bit happier. Team mate Kate had a big off and I fell on my face a few more times whilst trying to walk back up to session sections. I tried to hit the jump I’d been sessioning yesterday and after coming in sideways, using the side as a landing and running off in to the bushes I decided I was ready for home! I went home to wash my new kit and my bike. Again.

Sunday morning came and the sky was clear. It didn’t really mean anything as it had rained pretty much all night but at that point the sun was on its way up and maybe it would dry out a bit. I got on track for my first run and somehow it was wetter and more slippery than yesterday evening. The track was carnage, there were people flying all over the place and 2 particular corners were the scene of multiple pile ups. I went down twice on my first practice run and on the second crash got reprimanded by the marshal for not moving out of the track…apparently he wasn’t impressed by my flailing octopus impression! Thankfully I finally got back on both feet and managed to get my bike upright and the flailing ceased. Racing was going to be exciting!

The rest of practice went quite smoothly. The track continued to be covered in flailing limbs and flying bikes but I was loving it and managing to stay on. By my first race run the track had dried up a little and I hit almost every line. I had a stomp (more hasty and definite than a dab!) in a couple of places but otherwise stayed upright coming over the line in 4th.

Somehow I had punctured in the last bit of my first run so I fixed it, cleaned up the mud and rode down to the cafe to share a cuppa and tales of crashes and woe with the other ladies. I rode back up the hill to get ready for run 2 and as I was part way up the fire road my tyre went down again. Damn it, I didn’t have time to change it again which meant I was going to miss my second run. I thought back to the new wheel I had sitting in my lounge that I hadn’t set up due to being busy, balls. Franki suggested I borrow her bike which she couldn’t ride after a hard crash that morning. Hmmm interesting, my choices were to not ride, to fix my tyre and hope they let me do my 2nd run late or to use a bike I’d never ridden before? Clearly the last choice was the winner so I lined up at the top and answered looks of confusion with “I stole it”.

I had an awesome 2nd run but unfortunately I was a lot less awesome at the tight corners on the longer bike. Still I stayed on, styled the roots and hardest corners finishing in a final 5th place in Masters and 10th out of 20 in total. I waited at the line watching as other ladies limped over it covered in mud having crashed again. The usual whooping and encouragement was shouted on that final sprint and all the ladies were through. Some had completed their first ever race, everyone had completed the race in brutal conditions and now it was time for cake!

I went and watched at hecklers corner as the men came through for their 2nd run. About 10% had clean runs, 40% got through with 1 or 2 dabs and everyone else crashed. I figured I’d done pretty well to stay on given those odds!

It was the kind of race where the next day you have to check with various friends about their injuries and enquire about the health of their limbs. The internet has been littered with fail compilations, pictures of pile ups and people sliding along with their ass in the air lying on top of their bike.

What a weekend! The best bit? Discovering that inside my bag full of shiny kit was a shoe bag to keep my minging shoes away from everything else. Sometimes it’s the small things that make it. Well the small things and beautiful lilac knee pads.