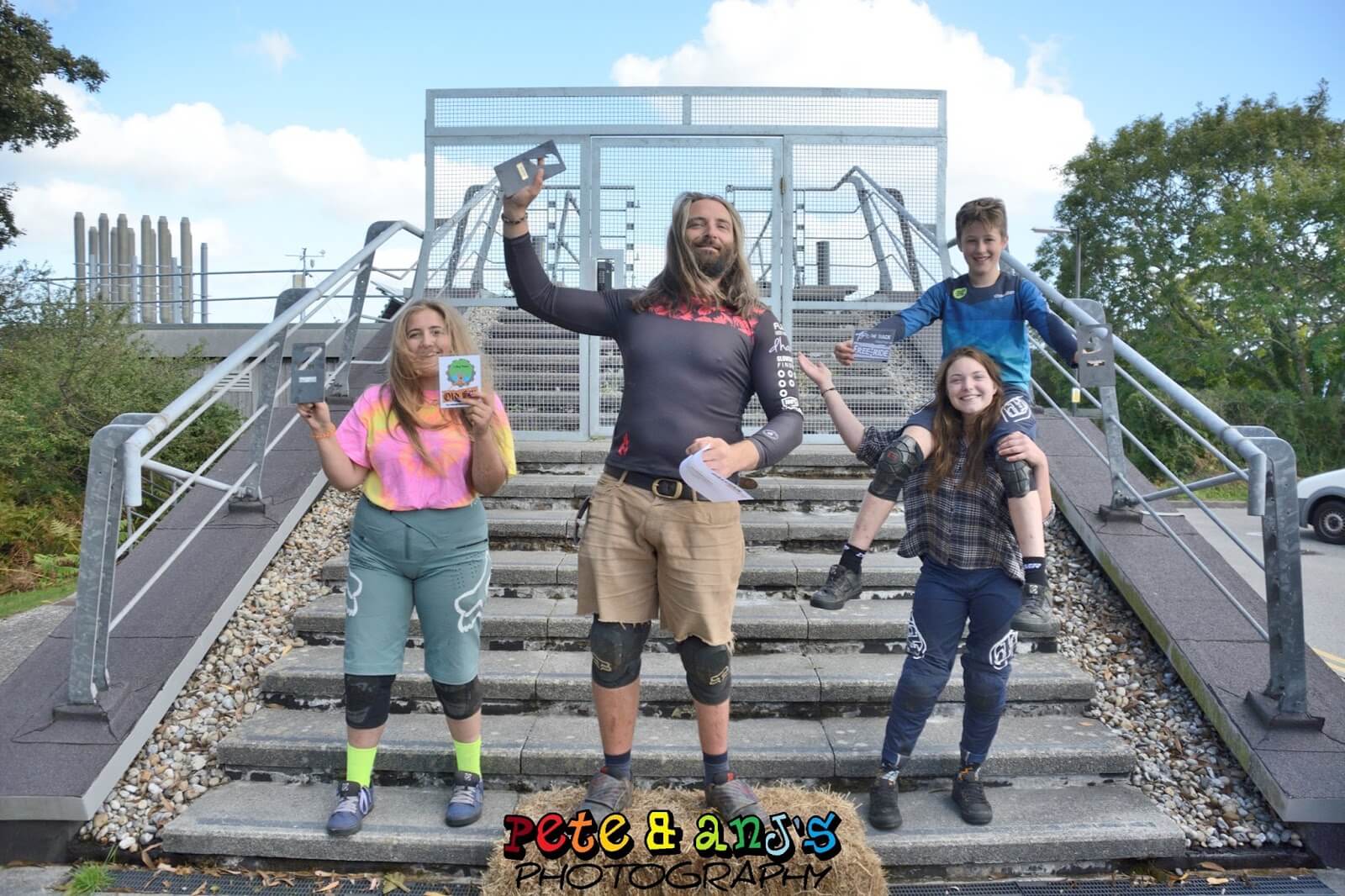 Ever since I’ve known him, Rob has been trying to convince me to race the Falmouth Urban Downhill. As I’m scared of descending on the road, I wasn’t convinced that it was the race for me! I breathed a sigh of relief last year when the event didn’t run but this year, I thought I’d give it a go, if only to shut him up!

My morning started badly with a flashy red oil light coming on on the van, getting lost in Penryn, crying down the phone at Rob and finally arriving half an hour after the agreed time (after bullying Rob to get there early for a track walk). He took it well but warned me as we set off down the hill that I was going to “freak out” when I saw the course but that it would be ok!

He was right. I freaked out! But we met Mollie at the bottom who had yet to enter and just talking her into doing the race made me feel a whole lot better. At least we were in it together! And everything with Mollie is always more fun!

The course started with a pedal out, then three flat corners around buildings and staircases. Corner after tight corner led you down over loose gravel, up and over curbs and finally through a very rocky wall that changed on every run. The aim here was to stay tight to the wall and avoid going off the curb but it was touch and go whether I could do it smoothly or not.

The first real feature followed the gravel and this was where I really freaked on our track walk. A wooden kicker with no transition sat about a foot in front of a giant slab of rock that bore the sign to “Penryn Campus”. The rock was slightly higher than the end of the kicker and the landing the other side was essentially flat grass with the downslope a very long way away. There was no way on earth I was going to attempt this and it made me feel like I was wasting my time coming. The B line was tight and flowy though with the exit sweeping nicely around to widen out the next corner. The jump was undoubtedly quicker but the sharp left hander as it rejoined the track meant that it was awkward and not as flowy as the B. Midway through practice, I actually considered this jump but on chatting it through with Rob, a chainring case was a very real possibility if I didn’t get enough height from the kicker. I decided the risk wasn’t worth it. But it pained me, a lot!

Following the kicker was a stairway of three sets of steps down between two buildings. Hay bales protected metal entranceways on the left of each flat section. I always ended up a bit squivvy at the top but managed to sort it out by the time I got to Will, the marshall at the bottom! Keeping tight to the wall at the bottom (Will texted me the tip between practice and race runs!) meant that I could just about get around the 90 degree gravelly corner and pedal to the step. Thanks for you constant cheering and guidance Top Marshall Will!

Outside the Manor House, there were two line options; a tight, gravelly 90 degree left off the step and a step down onto the concrete, or straight on drop to concrete and a flat out pedal to the wooden double. I tried the 90 once but felt the other option better for me, particularly as you could jump the kicker to flat if you stayed left. It took multiple practice runs to hit the gap itself but eventually I managed it, but I only actually made it nicely to downslope once and that was in my final practice run! My fastest timed run actually saw me chainring case it and still survive!

A flat pedal was interspersed with hay bales and metal hurdles to create chicanes. The high line over the grass to avoid them entirely felt right for me though. A set of steps followed before another flat section led to the bale gap. I couldn’t commit to clearing the bales on the grassy slope and so opted to cut inside them but stay on the grass, rather than risking Whip’s wheels (I borrowed the husband’s bike) on more steps.

Following the path down, another line split either sent you over a wooden ski jump or around a lightly longer concrete option. I didn’t actually investigate this as the ski jump was the one feature on my track walk that I actually thought I could do! As practice progressed I was actually making the downslope as well, instead of sending it to flat every time! After this, a tight right hander then led you down a series of turning steps that felt absolutely awesome if you hit them right!

I was absolutely amazed at how much fun I had on this course. I was, as predicted, freaking out on my track walk but once I’d ridden that track once, all thought of my fear of concrete had disappeared. The track was so much fun for competitors and spectators alike and it was great to see so many of my friends at one venue; some riding, some marshalling but most just there to spectate and soak up the amazing atmosphere! So thanks everyone for being there, but also thanks to Chris and Chaz Lamley who timed the event and chilled my nerves by hurling abuse (and the odd compliment) my way!

Huge thanks must go to Whippet, my husband who lent me his bike. Given the reason I didn’t have mine was because I cracked my carbon rear wheel last week, I think he was pretty brave to entrust me with his Dune, especially given the harsh nature of an urban downhill!

I can’t end this though without bigging Rob up yet again. I had to leave straight after my second race run to get to my niece’s first birthday party in Ivybridge. He struck me a deal; if I topped the podium, he’d stand in for me. Rob hates public attention and especially hates social media, but true to his word (he didn’t actually believe I’d win!) he took one for the team, donned my very fitted, very sweaty Flow team jersey and rocked the podium, just before having to stand up on his own for his third place in Masters, on a hardtail! Thanks again for talking me into it (and through it), Rob. I had so much fun! When do we sign up for next year!