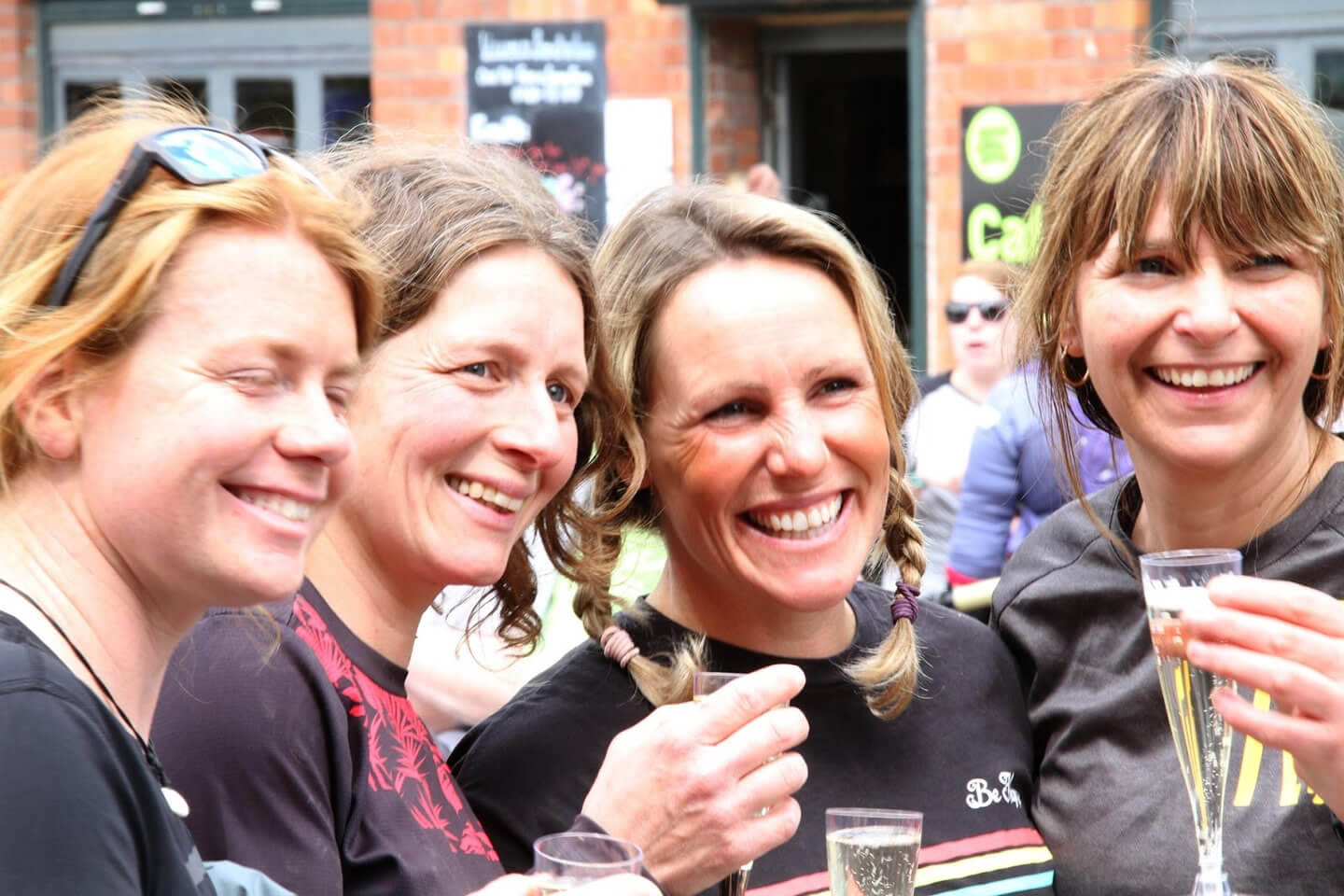 The Cornish Mafia at Ladies Do Downhill

Where to start with this??! I really don’t know how to put this weekend at the Ladies Do Downhill race at the Forest of Dean into words.
I’d heard good things about this after last years premier but nothing could prepare me for the giggles and camaraderie that came with 80 odd women of every ability gathering together to race Sheepskull. Until Easter I had never ridden the downhill tracks at FOD and even then I only did maybe two runs of Sheepskull before tackling “that drop” on GBU!

Since entering in March, I had planned a family camping weekend, forcing the little mites into coming to support Mummy whilst I sessioned the track on Saturday and raced on Sunday. Alongside the Flow team, my friend, Andrea was heading up to race, as was Evie but I knew of no-one else from this neck of the woods that would be going. That all changed mid week when Hannah and Mollie started showing an interest on our ladies Messenger group.

Torrential downpours at home on Friday and a poor forecast for the weekend saw my husband decide that staying home with the kids was preferable to a wet camping weekend! It also saw Hannah’s work on Saturday being cancelled last minute. And so, at 8pm on Friday night it was decided that we were gonna pack all our stuff into Hannah’s dad’s camper van, Glen, and ROADTRIP!!

Now I’ve done a couple of these with the lads but I’m not sure they quite compare! The giggles started from the minute Hannah and Mollie collected me from Trailmunki in Bodmin. The lash up of bungees, calving ropes and a shoe lace to hold my bike onto the rack was something to be believed.
With a coffee stop in Sedgemoor, we made good time and got to FOD at lunchtime. Already, there were women here, there and everywhere! It was great to catch up with Tara the mad Vet Nurse after meeting her at Southern Enduro two weekends ago, and great to see Ella, who we’ve met at Gawton a number of times, absolutely smashing it down the hill (right up my bum).

I was really glad that we’d taken the time to walk and session each section of the track. Despite a slip out on the root section in what should’ve been my last run of the day, leading to an aggravation of my hamstring injury (sorry for whinging!!!), the day was really productive and saw us heading off to the campsite buzzing, still giggling and ready for the next day.

After a comfortable (if flatulent – Mollie, not me) night in Glen, some fortifying fruit laden porridge and numerous trips to the toilet (common pre-race problem) we ambled over to Pedal-a-bike-away to sign on. Poor Andrea had left home at 5.30am and ended up waiting ages for the three of us to sort our bikes, numbers and fit in another toilet trip!

Practice saw a bit of a wait at the top resulting in most of us training the track with pretty much everyone else there. It was a good sighter, and the roots seemed to ride fine even without speed and so, a very worthwhile run and a great chance to catch up with faces old and new on the climb back up.

We managed two more full runs and a sneaky session of the bottom few berms into the final tabletops before a quick lunch stop. Rumor had got around that we all needed to be at the top of the hill to start at 12 and we hadn’t left much time to eat. I was concerned that as number 7, I’d be one of the first off but it turned out that the Pro-am category was running last, giving me plenty of time to heckle/shout encouragement to my fellow competitors. (Yay!!)

My first run left many an area for improvement. The top section is a series of corners with one quite nasty root that will stop you dead if you run into it. As much as I’d visualised the run in previously, I still managed to hit it on my race run. That and some ragged cornering in the lead up made me a bit unsettled at the start. However, finding the straight line prior to the root garden and surviving the roots themselves, my confidence improved for the second section.

A steep drop in from the fireroad saw me always over braking on the lead in, but using the right hand edge, you could then pump through the roots before pedaling a smooth traverse to the drop. On my first run, I missed the high line off it and sent myself through the braking bumps. I’m not sure how much time I would have lost here but this is why downhill can be so frustrating. All the practice you do, you aim to hit every chosen line. Any deviation from that can cost you time and it can get in your head. However, my favorite section awaited!

Two bermed corners led you out of the pedally traverse and into the “bum holes” as Andrea called them. A straight line through here was the chosen way although two steep S berms were also available. Pedaling out of this, a comfortable double led you into a kicker if you so wish (I didn’t) or a quick flick of the hips to use each side of the bermed “s” and above a root to take the highest line of the right hand berm. The next double was impossible for me to clear and held a patch of slick sludge on landing and so pumping them to the far right was preferable to send you into the high side of the left hand berm and down over two small drops to a rock garden. Keeping left here smoothed out the drops and the rocks.

A small pop over a ditch and a mental note not to brake into the next two berms before “PEDAL” ing out of the last and into the two tabletops for the finish. The first jump had a nasty habit of bucking your back end up and your nose down. It was my intention to manual this but I never quite managed it. I think my attempt to keep the bike low to the ground did make me faster into the second one and subsequently over the finish line.

To my surprise, I was in the lead after my first run, but only by a second in front of Evie. Becca, my Flow teammate was in third and Caroline in fourth. None of my friends were particularly happy with their runs, especially Hannah who had caught the rider in front.

A quick break and a coffee outside the cafe before meeting at the top for 2pm. For some reason, I didn’t feel that nervous. Usually, whether I need to hold off competitors or gain a few seconds on my second run, I go into the race run still bricking it. I think the atmosphere of all those girls together helped assuage some of that nervous energy and dare I say it, turn it positive! Perhaps because we were all having so much fun it didn’t matter so much?

My second race run felt good. I hit every line I intended to and felt it couldn’t have gone much better. We were seeded within our categories for the second run and as a result, I was first in our group to get to the bottom. A running commentary was given and so as I passed over the line to be greeted by Tara and my other friends, I heard that I’d gone a second quicker. Evie passed over next and I heard that she was still in second. Becca came through, still in third and finally Caroline still in fourth. I’d kept it!! I was over the moon! And all my mates were there to hug me!

Mollie had made up time and put herself into 2nd in Vets, just 0.4s behind the leader… should’ve straight lines the roots! Andrea had found twelve seconds (!!) to put her in third in Grand Vets, and although Hannah hadn’t been held up this time, her run felt like her first and she was wishing she’d asked for another. Poor Ella had been leading seniors after run one but, after a crash on her second run, having thought she was in third, she was knocked off of the podium by someone who had been racing in the wrong category. To do that well in your first race though is absolutely epic and I honestly believe she’s one to watch in the very near future!

Thank you so much to Kali protectives for my brand new, extremely pretty, full face helmet! What an amazing prize! Although it did cause many an argument on the way home as it spot on matches Mollie. But I’m sorry Mols, it’s all mine!! Big thanks to Muc Off for the cleaning products too. They gave a prize for every podium which is pretty generous!

As I said, no words can describe the atmosphere at this race. Everyone is looking out for each other and egging each other on! The support from the spectators is amazing! Whether you were a seasoned racer or it was your first time, you were all in this together. I’m not sure I’ve had that feeling at a race before!

Amanda Tanfield has created something amazing here and it would be great to get as many women as we can to Pippingford for the 10th August to repeat the buzz! So thanks Amanda for dreaming this up and making it a reality, hopefully there are many more to come!

Thanks as well to all the marshals and timing guys, particularly the commentator. It really added something to have your results called out over the microphone instead of searching for your name on a scrolling screen. It definitely added to the atmosphere at the bottom of the run for me!

If you’re a lady and you’re tempted by racing, give this a go! Don’t be put off by the fact that it’s downhill. You’d be amazed what you can achieve with a look first and the incentive of someone doing it with you and cheering you on. We all start somewhere and this is definitely the place to start!