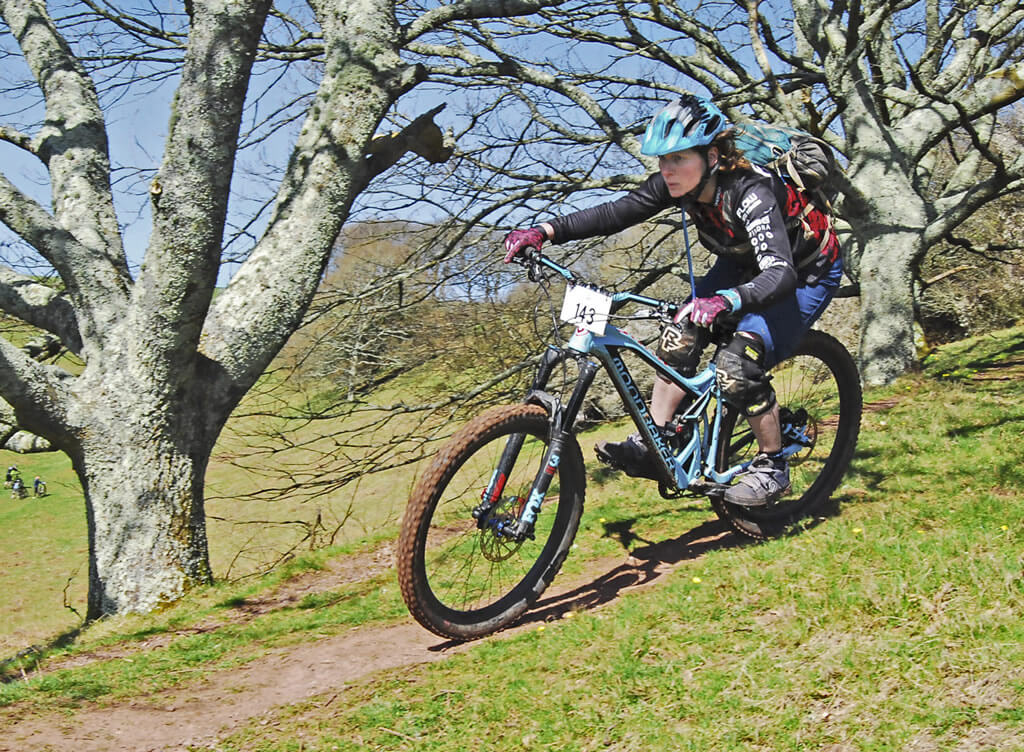 Like buses, we go years without a local Enduro and then two turn up at once! (Three if you count the entry for Bude going live next week!)

Following on from last weeks four stage, four season Enduro near Exeter, we were blessed today with glorious sunshine and amazing views on the Rame Peninsula, just the right side of the River Tamar! Organised by Adam Bowden of Edge Cycles, (previously of Gravity Project fame), you couldn’t ask for a better venue on a blue sky day like today.  And despite an air of occasional chaos, (the start for one!) Adam’s races always take on a relaxed atmosphere that lead to the most awesome of days out on the bikes.  Aimed to cater for all abilities, the trails may not be the most technical but they are by no means easy to ride.

I’m not gonna lie, despite my XC background, I really don’t like pedaling! I’m not sure if I mentioned this whilst scoping out the stages with my husband; Whippet and Russell; a buddy made from previous races, during practice, but following our first lap, they were very reluctant to come with me on the second!

My second practice lap definitely gave me more flow through the sections, enough that I actually enjoyed it. I found some lines that I wouldn’t have seen otherwise (thanks Georgina) and I felt like I may actually be able to race it instead of muddle through it.

Then cue the race head! Stage one was the pedaliest of stages and my absolute nemesis in practice. With a few flat corners (hate them) to start you off, an uphill sprint (ha!), a traverse to pick up speed and then an even worse uphill pedal (definitely not a sprint in my case) before traversing towards a set of switchback corners, with a little uphill nip in among them. A drop off a bank directly onto the fire road killed your speed before a sprint to the tape. Despite addressing my initial anger towards this stage during my second practice run, I did not hit the lines I’d hoped to prior to the uphill sprint sections during the race, making this a very frustrating and exhausting exercise. The joy was in the completion though and onto stage 2 I…..pushed!

Stage 2 was essentially the original track we’d raced in the Edge DH series that took place here last year. However, there were a couple of little tweaks to catch you out; a corner taped sharper than the worn line meant a few meanders into the tape in practice but a very cautious entry speed in my race run, and a little nip around a tree on the final sprint made for interesting gearing choices out of the final corner. However, this run is super fun and had me back smiling again, especially as I watched Andy Robert’s bike continue riderless from the line after his literal sprint finish, remain upright and turn a full 270 degrees downhill before coming to a stop on the bank, thus proving that a bike will always stay upright when pointed downhill!!

Stage 3 was my favorite run of the day. A sprint out of the box through a series of grassy “gates” to enter a hard packed single track pedal up to a couple of bomb holes. A sharp left at the top meant you could avoid the rooty drop and land yourself in a lovely wide catch berm before a few cranks took you to the next bomb hole. A series of tight switchbacks then sent you into a loose corner before the finish flags. Despite the last bit being more of a descent, I still finished puffing and unable to speak! A first, I’m sure!

The final climb up into the deer park cut you across stage 3 (with plenty of opportunity to miss passing riders) to the top of stage 4. Again, a sprint out of the box led into a series of grassy gates and into the woods. Although less pedally, the corners on this had been very slick in practice and I’d found myself taking a lie down on the final one. In light of this, I was cautious through the last 2 corners, not actually remembering where I was, costing myself time before the sprint to the finish.

So yes, I moaned a lot about the amount of pedaling I had to do, about my brake rubbing in practice (but strangely not in the race) and my gears not changing properly but actually, I had a really great day on the bike. The atmosphere was one of the best I’ve encountered at a race and the venue, with all of its amenities, was second to none. Adam’s chilled attitude helps create a relaxed vibe that really does make for a brilliant day out on the bikes with your mates. Isn’t that what Enduro is all about?

So next time Edge Cycles set up an event, whether you’ve raced before or not, get signed up. You’ll definitely come home smiling!