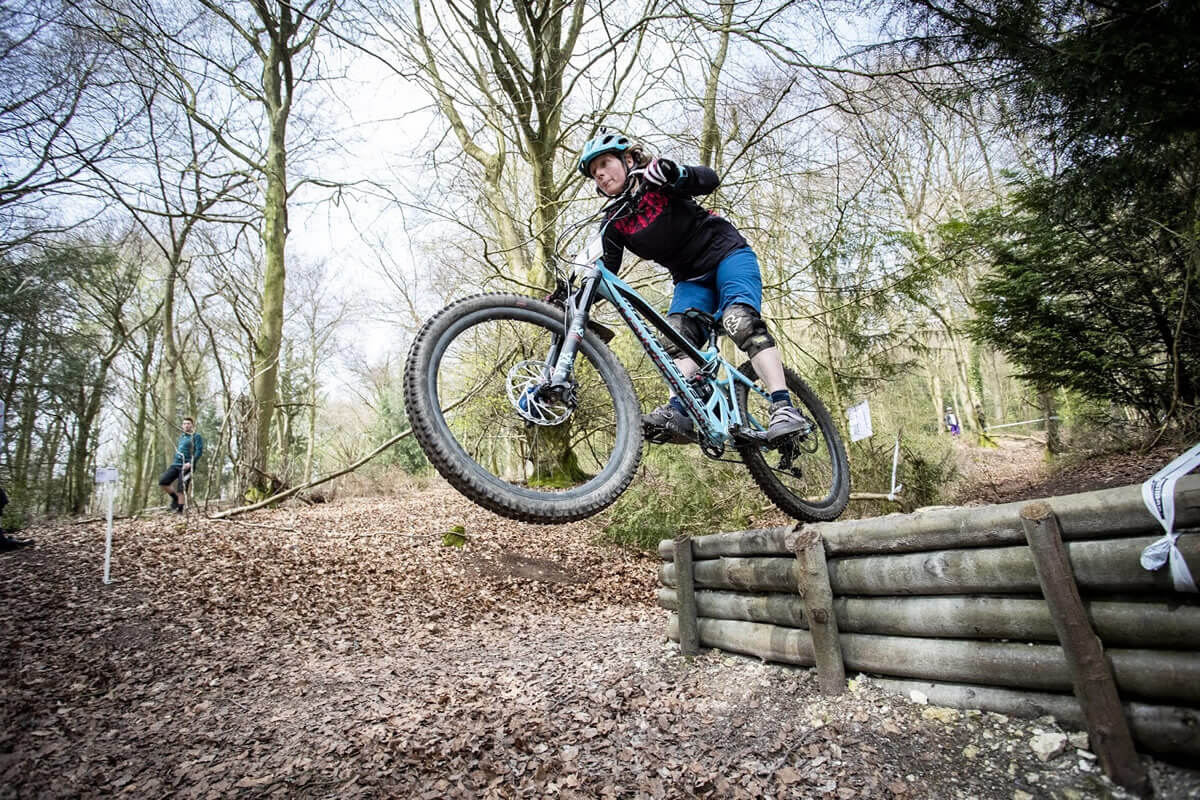 Why am I doing this? Yet again, I asked myself the same question as I popped the paracetamol to numb the throbbing headache caused by my daughter’s 5th birthday party on Saturday, and set my alarm for 3.30am. Last year I had the pleasure of racing a few of the Southern Enduro events held at QECP (Queen Elizabeth Country Park) in Hampshire. At that time, my brother, Matt, was living in Surrey and it made sense to catch up occasionally and race together. Matt now lives in Devon and has a baby so I was doing this one alone, and I’d decided to enter Elite. Whaaaat?!!!

Having won the Masters category at last years first round, 2017’s Mashup and the Southern Enduro Champs in Exmoor, I felt that it was time to step up and give Elite a go. However, I was bricking it. I felt like I was punching way above my weight. Those girls are rapid and I was concerned that they’d absolutely annihilate me. In addition to this, Matt is my wing man, my practice buddy, the guy who knows whether I’m capable of a feature or not and my line choice guru (unless Rob’s there to throw in some ridiculous “high line” or two). How was I going to fare without him?

Leading up to the event, it looked like there were to be only three in our category – a guaranteed podium, and I was willing to lay heavy bets on my finish position given I was racing Kate Wakely and local legend, Francie Arthur. So actually, pressure off. Or so you’d think!

I suffer huge nerves at the start of each event, at the start of every stage, whilst handing in my chip and, as it turns out, waiting for my podium! Quite often, this makes me appear quite aggressive and anti social. I received a message from my fellow South West race buddy, Mollie Leverton whilst I was driving up; “Just ride like you always do, don’t do anything different, and remember to be nice to people!” It made me chuckle and inspired me to talk to the people in the car parked behind me. Result eh Mol?!

Practice started terribly. Stage one involved a lot of pedaling (eugh) and flat corners (double eugh) in the top section, with a horrible pop over a big root onto lots of roots before a rooty uphill pedal! How the hell do you ride that?! The fire road crossing seemed to sap all speed before two loose, slippy corners led to an off camber straight and the road gap that Matt made me go off in last year’s race. I hesitated in practice but hit it and surprised myself by clearing it. My jump technique still needs work but I have obviously come on loads in the last year. Looking at it, I’m not sure how I cased it to flat before? Well, actually, bum buzzing the tyre is a pretty good way to drop your bike like a stone! From there, a long, flat out pedal saw the finish line.

After I’d done all 4 stages in practice, I went back up to try to get my head round the top section of this stage. It still felt horrid but I had a bit more of an idea of how to ride it (thanks to a pep talk from a Marshall!) Look forward and keep the speed! It helped a lot that the ground had dried a lot since practice opened at 9am. My race run went well but I had an unfortunate head on with a stump that stopped me dead. I stayed on but it cost me precious time.

Back up the main fire road climb to stage two that started in much the same way….pedaling and flat corners. However, I seemed to get a bit more flow on this and launched myself over the gap before the fire road. The tabletop after had me nosediving throughout practice but felt good in the race. Over the fire road, an short, sharp, uphill pedal sapped everyone’s speed before some switchbacks then led you to a very (a mile at least?!) long, slightly uphill pedal and over a small kicker that had a gap behind it early on but thankfully someone filled it in with sticks by the end of practice! A few corners then set you up for a straight line sprint finish.

Stage three was a bit more like it but still had a pedal out to a series of switchbacks before descending into a long off camber traverse that despite the odd bit of pumping, I still had to pedal, all the time looking out for sniper roots to catch me. A high line round a tree then led to a set of steep switchbacks and into the finish line.

These, in my race run, did not feel smooth as I kept grabbing the back brake and slamming my rear wheel into the catch berm instead of using the berm to hold speed. However, some very nice spectators said I looked quick which is nice to hear!

The fourth and final stage was the best of the day. A short pedal off the start line was about all you had to do. This trail had it all; kickers, bermed corners, a gap jump, a sweet (but rooty) series of drops and a rooty traverse that you could pump. It flowed from start to finish and was the perfect way to end the day.

Normally I try to get round as fast as I can to get the race over and done with but today I took my time. I stopped for a drink and a chat with my mates (who were cheering the road gap on stage one) on every lap. Part of this was me being sociable, soaking up the amazing atmosphere that Southern Enduro always seem to create, but the other reason was that I’d given every stage my absolute all; I couldn’t physically get up that hill again without stopping to catch my breath! By my fourth climb, I finally met up with Nicky again, the girl that had parked behind me. Along with her friend Adele, we chatted up the final climb. I was enjoying my race so much that I was going up to stage 4, not wanting the race to end. A novel feeling for me!

Post race, it was great to chat with all the girls. As much as I love racing with Matt, I’m always rushing off to go and catch his runs so miss the post race debrief! I was pleased to come in in third place, 37 seconds behind Kate and 20 seconds behind Francie, which, having seen them ride, I’m absolutely stoked about! I would have won the Masters class by 36 seconds and finished third overall. Perhaps I should be racing Elite, it certainly makes me push harder!

Yet again, thanks to Alex at Trailmunki for sorting my bike pre race, to Scott and all the crew for putting on a great event (the marshals especially as they’re all so jolly!), to Natural Playground for the prize and to Russell Wheelan, who I met at this event last year, for the offer of a roast and an overnight stop should I want it! My 18 hour day will catch up with me, I’m sure!