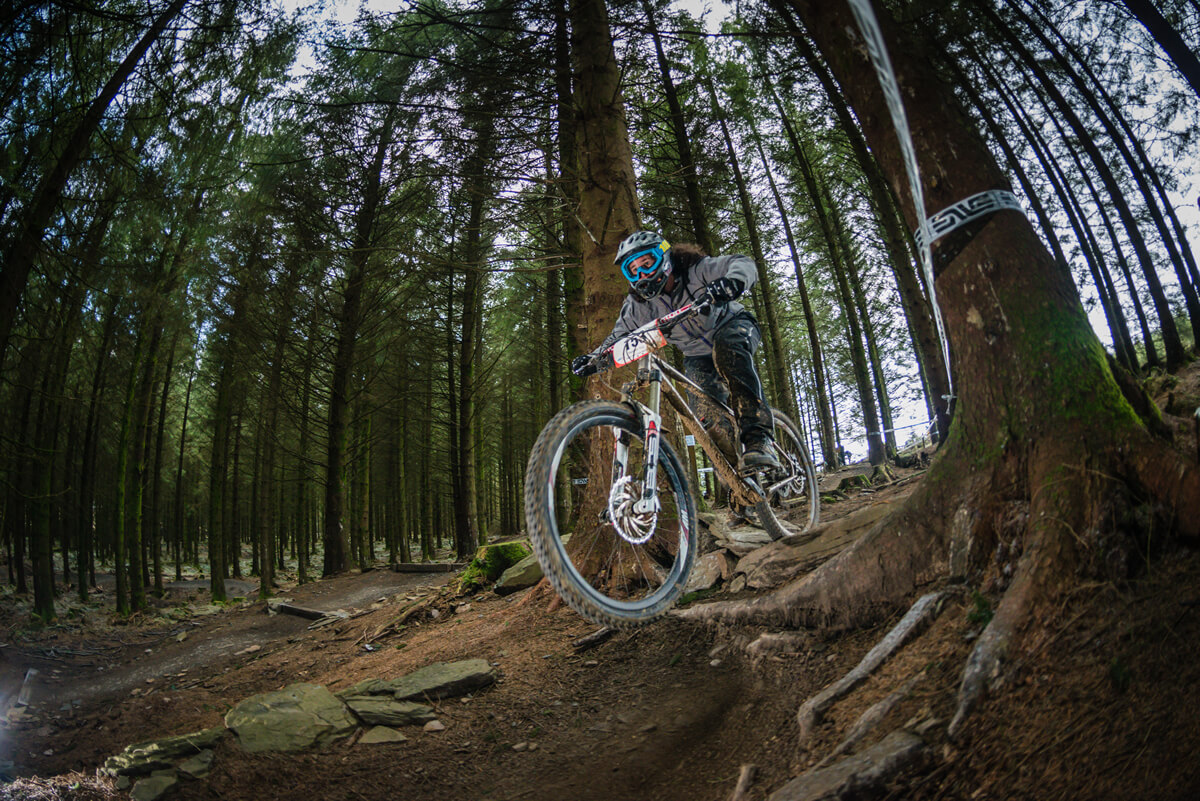 Flow MTB rider Heather took part in the first round of the 2018 Haibike Welsh Gravity Enduro at Bike Park Wales. In bitterly cold conditions and on a hard tail she went on to pick up 4th place, here’s Heather’s race report…

I honestly wasn’t the most motivated of racers on Saturday morning and I couldn’t quite pin down the reason for it. Was it the Bike Park Wales curse? I’d tried to go twice previously and ended up with a broken-down van on the M5 the first time and then completely anaemic and unable to ride at the BDS. Was it the prospect of -2 degrees, snow and 35km/h winds? Was it a shift in my drive to compete? A subtle change in that need for recognition, that need to prove oneself, that surge that focuses you on being the best you can be? That realisation that I was going more to catch up with friends and have fun on my bike than compete for the top spot?

Whatever the reason for the reluctance I was soon winding my way through the Welsh hills on my way to Merthyr. As promised within 5 minutes of arriving I was greeted by the chirpy face of Adel Tyson-Bloor and it was as if we were back at the BES talking shit and catching up on good times. After working out a rough tactical plan of how we were going to attempt the ‘mash up’ concept we were off up the hill. We decided to ride all 3 stages in order getting in a quite early time on the longer, rootier more technical stage 3. I hated it. Sometimes life on a hardtail is rough and this was definitely in the rough category.

Looking at our times I knew that I was losing WAY too much time on stage 3 but I was also dreading riding it again. We went and hit stages 1 and 2 again and I made up about 5 seconds per stage but inevitably I knew where the crunch was. That said I was having an awesome time on the bike, it was so good to catch up with some familiar faces, and despite the biting cold wind I was actually pretty warm (just goes to show that a winter of freezing yourself on the bike teaches you what kit to wear!). And so we lined up for stage 3, in my head I knew that I just had to knuckle down, ignore the pain and try to hang on to the handle bars for the last third of the stage.

I don’t know what it was but hitting it the second time, tired and anxious, I felt so much better. My arms held out, my legs held out and my moral held out. I did admittedly spend the last third repeating ‘come on Heather, just keep pushing, you can do it’ over and over in my head, but I knocked 22 seconds off my previous time… It wasn’t enough to get me on the podium, but it got me close and allowed me to hand my transponder in with my head held high.

It’s funny I wasn’t expecting it, but this race was a true learning curve, learning how to race and push with a different mental attitude. Learning to accept 4th place when you’re sitting in the café and all your mates are asking if you won again. I’m happy, I had a great time and I’m looking forward to more enduros this year and learning to adapt to my new mindset. That said this race series is perfect for those wishing to get into the racing scene. The tracks were all trail centre red trails, you know what to expect and what the difficulty level will be (whereas some races it’s gonna be steep, gnarly, techy stuff). I just want to lastly thank all the marshals that withstood the freezing conditions, plus the organisers for a cracking event.