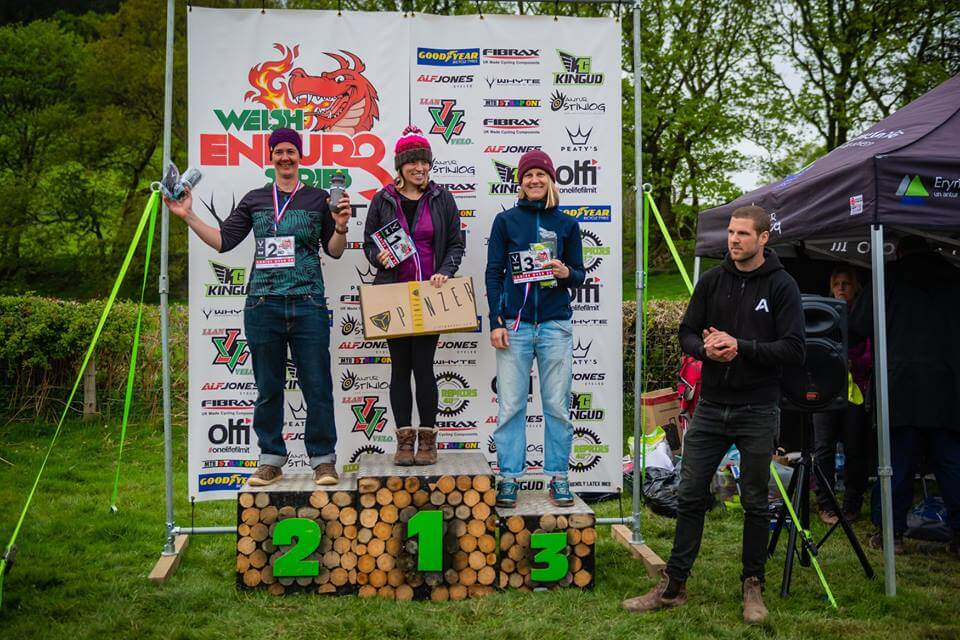 After my terrible experience at round 1 I wasn’t particularly keen to go racing in the wake of Storm Hannah. I hadn’t even swung a leg over my bike I was so unenthused with mountain biking. But Sunday morning I was up bright and early, bags packed ready to be collected by my trusty lift service that I have been wholly dependent on for the last year (Chris and Gareth you are amazing). The Dyfi is the closest race for us so in no time we were kitted up, number boards strapped on and off up the climb to go test out the trails.

Stage 1, Sparrowhawk, is one of my favourite trails in the Dyfi and as I swooped into the 2nd half of it a grin appeared on my face, weaving between the trees, sneaking out cheeky lines, searching for grip in the greasy ex-loam. We were soon on our way to stage 2, King of Steep, another of my favourites, although given the recent weather conditions it was with trepidation that we approached the top of the stage. There was quite a queue, we had been warned by Bud that they would be making a decision on whether the stage would be included in racing part way through the morning, that decision was made about 3 minutes before we got to the front of the queue. For me, it was the right decision, as much as I wanted to race that track I know how steep it is, there’s little in the way of catchment berms (read it’s just a whole load of loam on a mega steep slope…), and given the queues in practice it was going to be a nightmare come racing.

As everyone turned around to head for stage 3 Chris and I decided to go ride Sparrowhawk again, we didn’t want to be queuing again and we could test some of the sneaky lines I’d spotted. Which meant that I had a much bigger grin on my face as we headed to stage 3, aptly named ‘Heaven and Hell’; it was Hell. The track snakes across the side of a hill, it’s imperative to maintain flow and momentum to get over all the little humps but it was so wet and muddy that it was all you could do to stay on your bike. It’s the stage where Dyfi enduro is won or lost. Finally, we moved on to stage 4, a rooty mud fest which finished in Rhys’ (the local trail builder) back garden.

After a peaceful lunch break we headed out for racing, Sparrowhawk was great I really enjoyed myself and I nailed my lines but felt like I could have gone faster. There were huge queues for Heaven and Hell as large gaps between riders are needed to avoid catching people up. I was praying that it would have dried out enough to just get that little bit of grip needed to be able to find the flow and maintain momentum, I was in luck! So it was grins all round as we headed to the final stage. In practice it had literally been a case of foot out, stick the bike in the rut and hang on to the handle bars. Given how much Heaven and Hell had changed it was basically like riding a stage blind!

It was great to enjoy riding my bike again, and it appears my financial struggles are coming to an end which means I’m going to be able to fix my van, service my forks and get myself a new rear brake. All of a sudden life feels good, what a difference a month makes!