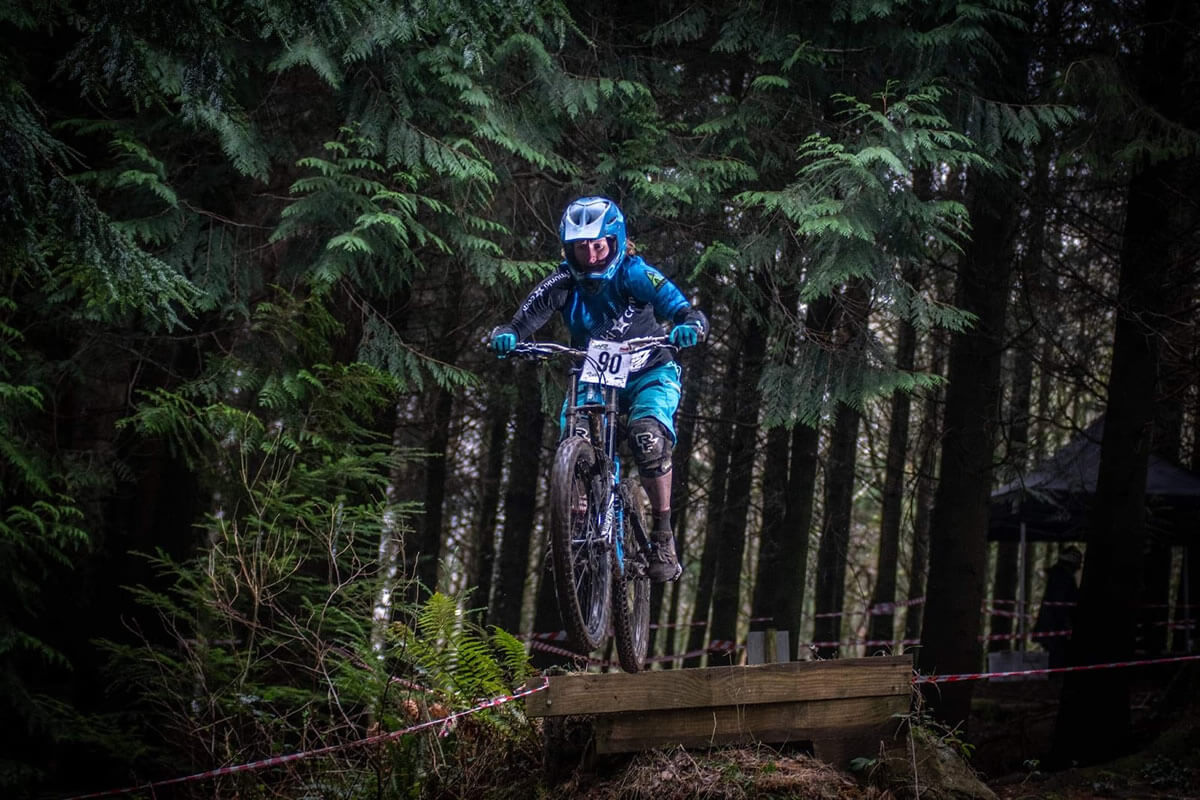 First race of 2019, first race for Amy Jones as a member of the Flow MTB race team and first podium of the year, pow! Here’s Amy’s race report on surviving Supertavi…

The lead up to this race has seemed endless. December’s race at Old Hill Bikepark was cancelled and since then there has been a lot of time over Christmas and the last month where you could go and practice. However, it’s been dry throughout the last month and no matter how much practice you put in, nothing really seemed to help us prepare for that track in today’s greasy conditions. Supertavi is technical and no matter how many times you run it, whatever the conditions, there is always another line to try or another bit to catch you out.

One of my friends and possibly my closest competitor, Hannah Mason decided over New Year to throw herself off the Supertavi Ladder Drop. This drop has NEVER been on my radar, and on our trip in Christmas week I recoiled when I looked over the edge. However, if she was going to do it in the race…..I needed to do it. Unlike me, Hannah is not competitive. When she knew what I was thinking, she gave up her time last weekend to get me over it too. Do it I did, but I came up mega short and decided that the line to the side would be faster than that for me! Plus there’s the fear of impending death on the start line that I could probably do without!!

The other part of the track that was losing me sleep was the corner following the drop. The original line sets off in a straight line after a rocky wall, continues for at least 5 bike lengths and then drops you into a rocky chute that no matter how many times you ride it, always seems unpredictable. There is a massive short cut though. It involves turning right very shortly after the precipice of the rocky rise, over some very naggery rocks, rolling steadily over a series of fairly daunting big rocks, and then straight lining the loam to drop off another massive rock and into a berm. I have encountered this area before with some other “easier” line options and needless to say, it ended badly. One such occasion saw me clinging to the edge of the rock drop, my bike above me, shouting “help!”. It’s pretty big and nasty looking!

Hannah and I have looked at this corner for three weeks and it was only today, with the help of my (unofficial) coach, Rob that I plucked up enough courage to try it. The lead in is tricky as you need a perfect line up through the rocky “crest” to turn right early enough to straight line the drop. With time for only two attempts in practice, I made it once. Not the best prep for the race itself!!

I went off hot on my first run, faster than I had at all in practice. I was ragged through the traverse between the drop and that corner but just as I thought I’d got it back and put power down to sprint for the rise over the crest, my front wheel washed out. I legged it up the crest, bike in hand and got on with every intention of doing the drop. I bottled it, took a random line out and went the long way round! To top that, and probably from trying to claw back time (impossible, I know) I completely washed out on a chute into a fire road, sending my bike first off the bank and me after. It wasn’t a great time, but it was a time at least.

After much deliberation, whilst spectating the rock corner, I decided that I should just aim to stay clean in my second run and maybe stick to the long way round. However, on entry to said corner, I found myself pointing towards the drop and went for it. It payed off. The rest of my run was clean and I came down thirteen seconds faster than last time.

Maya was on fire and was absolutely buzzing at the bottom. We knew that unless she severely messed up today, it was obvious that she would win as she has in every other round, but it just goes to prove that we all have goals and racing is racing! We all want to look back on our runs and say “there’s nothing I could’ve done better”. I definitely couldn’t say that but I was close enough and my time was enough to put me second. With that I was happy! 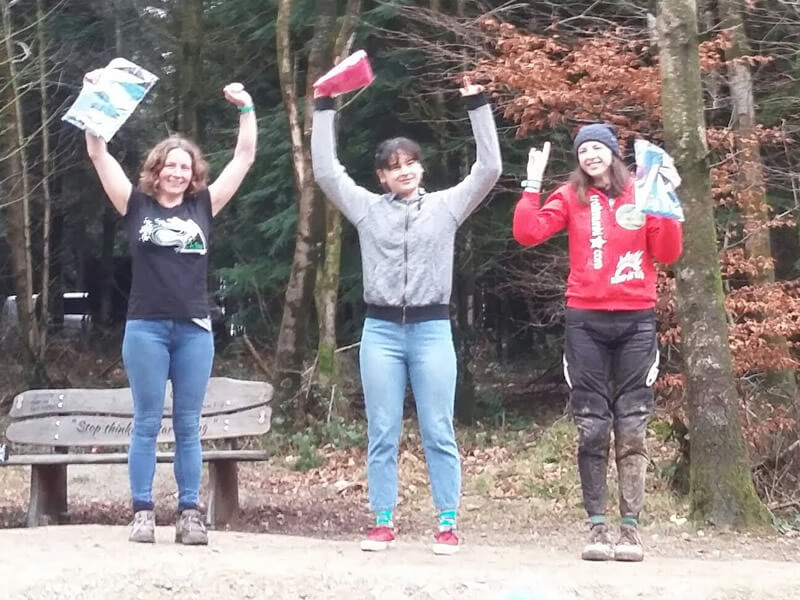 Evie came in third having never raced Supertavi before. As for Hannah, she managed to go straight on instead of round the berm after trying the ladder drop again in practice. She’s fractured the head of her humerus and is awaiting decisions on how to fix it. She wasn’t the only person in an inner tube sling, the winner of the youth category even had one on the podium! Surviving Supertavi is definitely an accomplishment in itself!