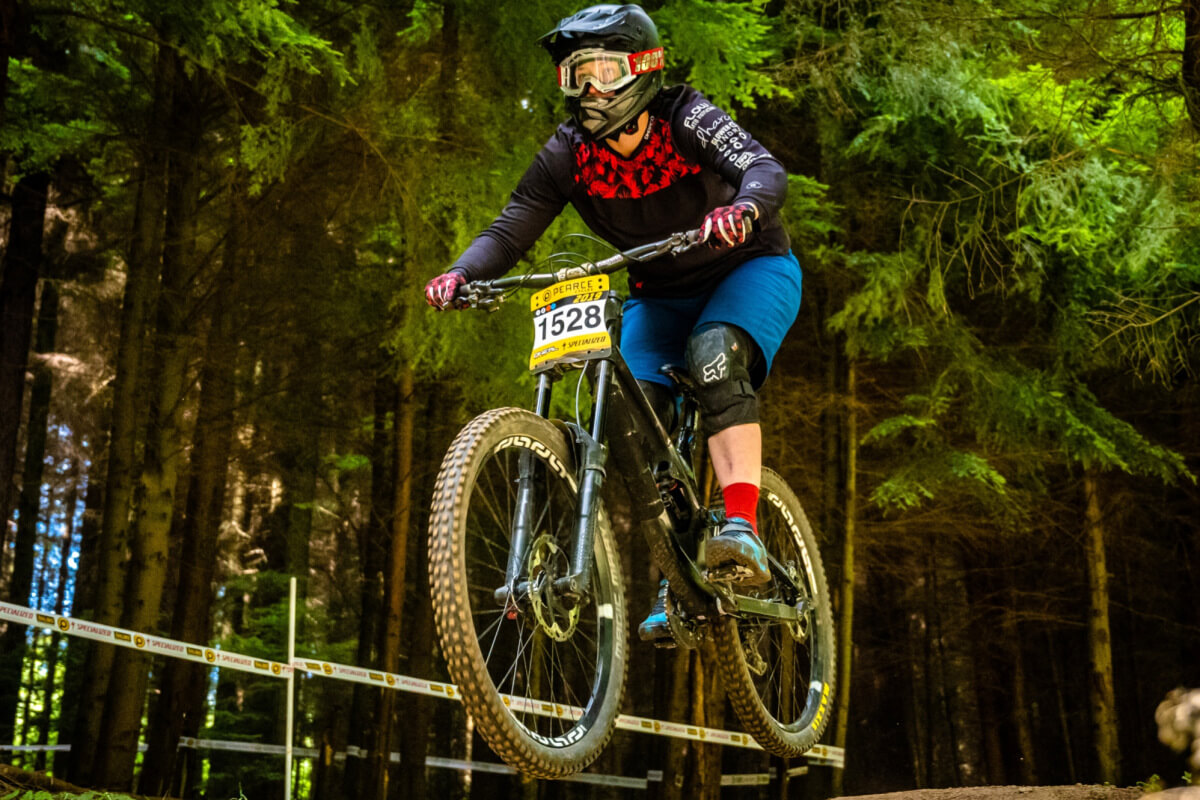 The weather was a little wet in the week running up to the 4th and final Pearce race of the series so I was surprised and delighted to find a dry field for camping. A quick walk up the track before it became fully dark revealed a bone dry track with inches of a weird chalky dust! I could hardly believe my eyes but the little puffs my feet kicked up confirmed it was indeed dust! I last raced at Bucknell two years ago and the team have made some great improvements to the track including a lot of work to smooth out and remove the braking bumps in the corner after the big ski jump. I was excited to get on my bike the next day.

Saturday morning dawned warm and sunny and I headed up for a first leisurely run down the track. I’ve always struggled to find flow on this track and run 1 showed me that today wasn’t going to be any different. I straight lined into corners, overshot key turning points, stalled here there and everywhere and generally made a bit of a hash of it.

Run 2 was done with different people but otherwise went exactly the same as run 1. Normally by this point I’d be feeling frustrated but because I had expected this I was as cool as a cucumber. Previous frustrating races here had left me disappointed and having a fairly rubbish weekend and I was determined that it would be different this time. I was not bothered if I didn’t get a great result as long as I had fun. This attitude coupled with the knowledge that I had all day to try and learn the track meant I had an absolute blast all day long!

I had a great day riding with friends and making new ones. Everyone was finding the dust slippery but awesome fun and oddly it turned out that everyone found the track a little like I did. If you went slow it was cruisy flowy fun but as you turned up the pace it was hard to find flow, easy to stall and the track punished every mistake. Hmmm maybe I had been a bit hard on myself at previous races here.

As practise finished most people took advantage of a lift to the top and spent the glorious sunny evening walking down the track exclaiming at the dust and huge holes that had appeared on track. Well sort of appeared as most were hidden behind inches of dust so weren’t that obvious until you pitched into them! My track walk didn’t reveal any new lines but it did confirm that although it felt awkward in places I was on the right line.

As it was the end of season Pearce had their big hog roast and we all settled in after a great day riding with soft floury baps filled with goodness. The locals had been really friendly and invited people to pop down to their village fete. They had also extended the offer of using their sports field showers so anticipating a nice hot shower I set off into the village with Katie. Katie turned on the first shower muttering that she hoped it wasn’t cold… the water ran hot and we both gladly stripped off and dove in. Then we dove out again pretty damn fast as the water continued heating up until it was scalding! With no options for temperature control, I tried the boys showers but they were just as hot. We took advantage of the water by using various items of clothing as flannels so we could get clean without melting our skin off. Not perfect but it felt good to be clean after all the dust. A laughter filled evening with friends over cider finished off a pretty perfect day.

Sunday dawned clear and sunny with heavy dew on the grass after a cold autumnal night. The track was short so I didn’t rush to get on track as I figured it would be easy to get 2 practise runs in. I walked up to the uplift and was surprised to find a pretty big queue but it had moved fast on Saturday so I didn’t worry too much. After we’d stood in the queue for quite a while and it hadn’t moved it was clear there was a problem. Apparently one of the vehicles had gone off the side of the track and all the others were needed to haul it back up. So we stood in the sun watching riders slide out on the wet grassy turns as the sun gradually dried off the field. Eventually we got on track for a pretty good run and figured we could squeeze in another run before practise closed. At the bottom we were greeted by a closed sign 20 minutes earlier than the uplift should have closed. Normally that would have been fine but with such huge delays many riders, including us, had only done 1 run.

The uplift had closed early to make sure they got through the queue before the end of practise so we joined a group of maybes hoping to fill any gaps in the last uplift trailer. We got lucky and rushed to fill those last few spaces and get a second practise run in. Katie and I were the last to set off from the top so we could have a clean run without faster riders catching us up. This all worked really well until part way down the track when people started dropping in behind us and wanting us to pull over. I’m always happy to pull over for a faster rider but when they drop in right behind me, having seen that I’m slower than them, I am not so obliging. We continued with our uninterrupted run and were pleased to see the field had dried out completely when we got to the bottom.

I went to the top for my first race run feeling calm and excited. My aim was to get a better time than my last race here without worrying about positions. My run was a bit ragged and far from perfect but for bits of the track I actually had some flow! I was surprised to get to the bottom and find myself in 4th place not too far behind some very fast girls. I figured if I tidied up my run a little I could take a couple of seconds off so I set off my for my second race run with that in mind. Despite riding more smoothly I went slower than my first run but managed to hang on to 4th place. It turned out that not caring and just enjoying myself was faster!