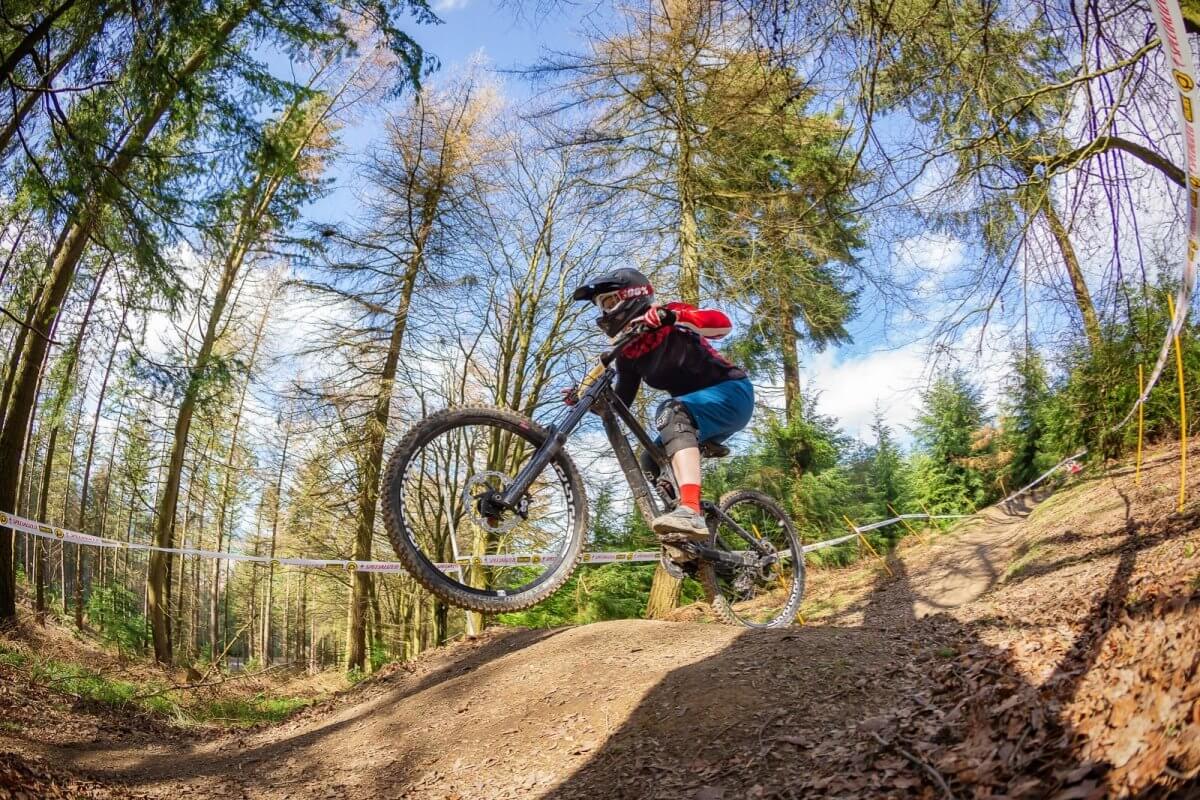 2019 season is go! Slime mud and trees collide to make a fun fast race (I might have collided with them too shhhh)

It seems like only a few weeks ago that I tidied away my kit from the last race of 2018 but already I was scurrying around my garage looking for all the things I needed for the first race of this year. As the pile of kit grew higher the weather forecast got better, that couldn’t be right surely?

I loaded my car in the sunshine, trying to shoehorn my entire house in to my tiny car and set off for Bringewood and Pearce series round one. Somehow I have never raced Bringewood before, normally due to breaking something shortly before it so I was really excited to finally have the opportunity and to get there with no broken bones!

A track walk revealed that some sections were dusty and fast but some sections were a weird greasy mud that looked like it should be tacky but moved like slime under your feet. You could stand on it and watch it ooze to the side as you sank down in to it but it weirdly didn’t stick. All it needed was a garish fluorescent color and you could make any kid smile with a tub of it!

Practice kicked off on Saturday morning and with it came the usual mix of excitement and nerves. I admired my beautiful new shiny helmet and hoped for a good day. As I wondered to the uplift queue I made slow progress due to the number of people to hug, chat and catch up with. Pearce races are like one giant family and with a big grin and a feeling of contentment I knew today was going to be a good day.

It was just like old times practicing with Amanda, sliding round corners and whooping down the track. That weird slime claimed me and sent me off into the bushes. As I tried and failed to climb back up the slime on to the track an increasing number of riders joined me in the bushes and we all slimed around together until the marshal red flagged the track helping us all climb back out haha.

The uplift banter flowed, my face hurt from smiling so much and the track was riding well if you discounted the slimy section but even that was fun. I hadn’t done as much riding as I hoped over the off season due to a number of injuries that kept me off my bike. A couple of uplifts recently had seen me frustrated as I tried and failed to ride tracks I could normally do and did large sections on my face, hence the new helmet. Practice was a huge relief as my skill suddenly kicked back in after the few weeks of frantic practice and although I wasn’t up to speed, I was enjoying the track and having the fun I had hoped for. I finally felt like I could ride a bike and boy was she riding well after some much needed love from Sprung.

At the end of Saturday practice I was really happy with how the day had gone. I knew I was off the pace but I was riding like my old self again and enjoying every second. Since the goal for this race was to get back in to the swing of racing, enjoy myself and focus on lines and skills rather than results it was shaping up to be exactly what I hoped.

Race day dawned sunny with a cool bite to the air that promised a scorcher of a day once it got going. I pulled on my race kit and set off for a couple of fun practice laps feeling a bit self-conscious of my sleeve given my current riding skill haha. I did a perfect 180 slide to ass down the track, fully committed with hands and feet still perfectly on the bike as I slid lying sideways in a cloud of dust much to the amusement of the spectators.

The nerves set in as I sorted kit for the race and set off for the uplift queue again. We got to the top, everyone was in fine spirits and then the queue stopped moving. A red flag left us sat in the sun for 45 minutes which would have been pleasant if the breeze wasn’t so chilly. Almost every race last year had a huge wait due to red flags so I had learned how to deal with the anti-climax and then sudden adrenaline surge when racing finally started again but it is still far from my favorite way to start a race. Trying to warm up my cold limbs the racers got back on track and finally it was my turn.

I set off for a calm and collected run but it soon turned a bit rowdy as I barely stayed on track through the slime, teetering on the edge for a while before hauling it back on track. It went downhill from there as I clipped a couple of trees and made the spectators laugh by talking to the trees, crazy lady!

I was sitting in 9th with a time that I was happy with. I knew I could go faster if I could clean it up as trees are not the fastest line but given my off season I was chuffed to not be too far off the pace after all. The only problem I could see was that my second run is normally more ragged than my first and given my first run I didn’t think that left anywhere to go other than the floor…

It started to get a bit dark as racing ran further behind due to red flags. Gaps shortened to 20 seconds between riders in an attempt to get the last racers down before they needed lights to get through the woods. It felt like we had to wait for ages and then we had another delay at the top of the hill before we finally got on track for our last race runs.

The headwind had increased and I just couldn’t get going in the top section of track. I pushed it a bit harder and yep, you guessed it, got a bit too rowdy making friends with more trees. The bottom of my run was smoother and I crossed the line a little faster than my first run but dropped in to 10th as the whole field moved positions.

I might have finished in 10th but I was really happy with my time and how I rode. The best part was that I enjoyed the entire weekend and left feeling really positive. I hit my goals and felt ready for the season to kick in properly in a few weeks with the first national. I’ve still got some way to go to get back on pace but that will come now I can actually stay on my bike…

All the prep work I have done in the gym and with my diet has paid off, I felt strong and well fuelled despite being a bit out of race practice. I can’t wait to see what the rest of the season brings!