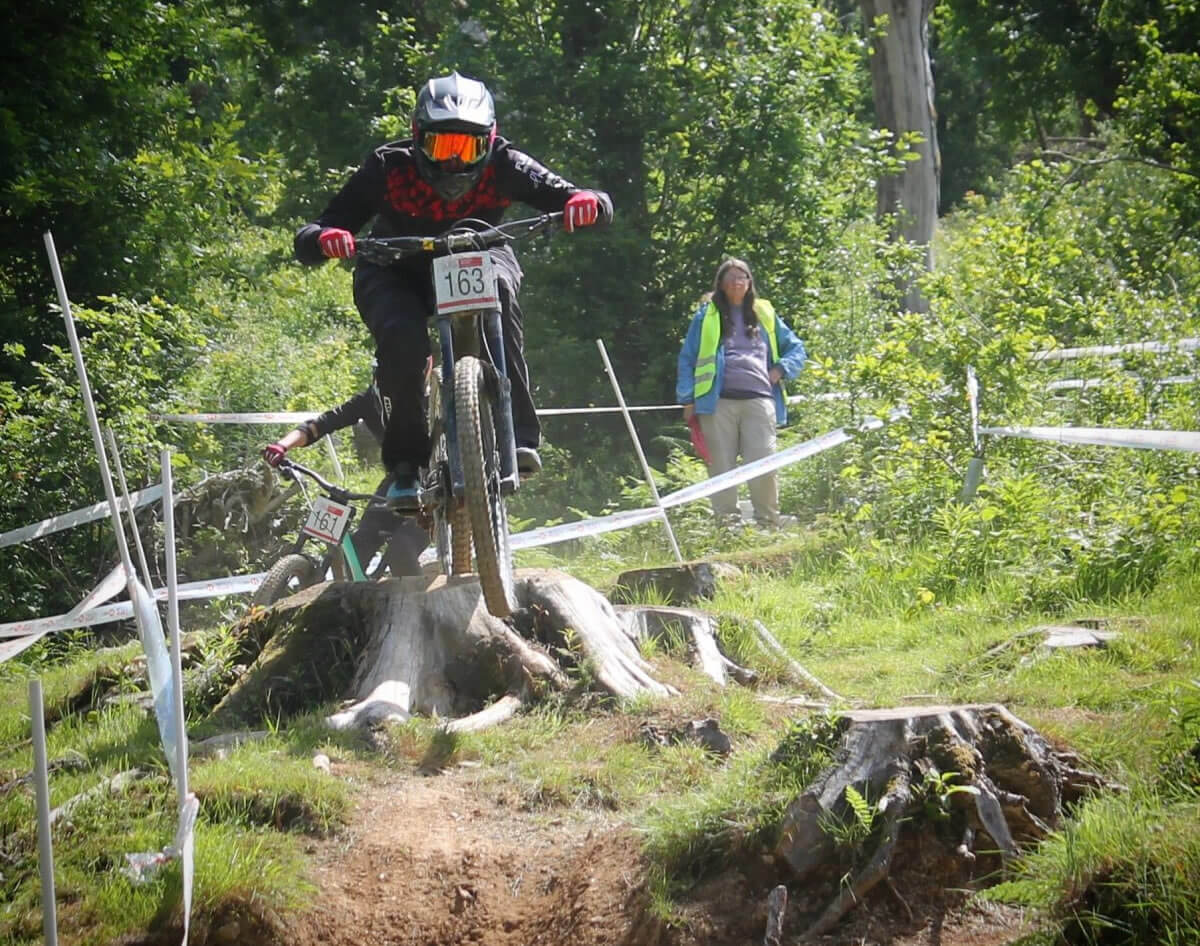 Racing, friendship and the usual Welsh helping of mud (shhhh don’t tell everyone about the dust!)

As Round 3 of the National Downhill series approached I watched the rain hammering against the windows feeling resigned to a wet slippery race. Rhyd Y Felin, or Bala as it’s known, is one of my absolute favourite tracks; in the dry it’s balls out fast weaving through stumps and in the wet it’s face down sliding through slop but when you get the lines weaving through muddy stumps it’s the best feeling.

A day later the weather lifted and apparently the sun shone in Wales. Locals were saying the ground was drier than expected but having been there before after heavy rain I couldn’t see how it was going to be dry? I packed for all eventualities, loading wet tyres, dry tyres, water proofs, hero lenses and sunscreen.

Driving over I felt a sense of nervous apprehension. My last race here ended with me in a cast and off my bike most of the winter after trying to snap my thumb off. I was keen to go fast but also to stay injury free.

Friday evening track walk split the track into 2 halves. The bottom was dry and dusty while the top had a stream running down it and was wet. However the top holds up well in the wet compared to the bottom so I figured we were super lucky and could run dry tyres all weekend! The midges were out in force, way worse than Fort William and as we sweated our way up the steep track they were in our ears, eyes, noses and we were feeling generally murderous towards them!

Saturday dawned to a clear blue sky stretching as far as the eye could see and promised to be a scorcher of a day. We had decided to have a lazy start as we were all feeling the effects of a busy week at work. We sat in the sunshine drinking tea, eating breakfast and chatting. This is why I love races; the friendship and people, the banter and laughter and the support and camaraderie all combine to make a big race family. Oh, and we get to ride bikes together too, what more could I need?

We got on track and I remembered immediately why I love this track. As I battered down rocky gullies, weaved through stumps pulling crazy shapes, slid out on sniper roots and realised I couldn’t see in the woods with hero lenses on I was having the time of my life. We got down to the bottom laughing and ready to get straight back up to the top. We spent a pleasant morning hammering down the track in the sun, getting spattered with mud at the top of the track before picking up a fine coating of dust through the bottom, it was awesome! I had a couple of wild moments and by lunchtime I’d been down on the floor after sliding out on a corner but it was good dusty fun.

Paul got me to draw the track from memory on his fancy new chalk boards. After a faff where he wanted it to start from the top but that meant I was facing the wrong way so I demanded to draw it from the bottom so it faced as if I was riding it I had a lovely picture of the track! Emily joined in and drew her version of the track without seeing mine, she also had the same issue about starting at the bottom vs top! Once we had 2 lovely pictures we chatted through them and they were incredibly similar, except for the straight section in the middle of mine that Paul couldn’t understand. Obviously it wasn’t actually straight but since I just followed the main line and there were no big features to remember I drew it as straight haha. Knowing there were some gaps on our map where we were sure we’d forgotten a corner or 2 we set off for more practise.

We were struggling to get a clean run in, catching up with other riders (I know that pretty much never happens!!) and getting red flagged for the uplift or crashes but we’d managed a run through most sections and were picking up the pace. A rumor of a changing weather forecast for Sunday saw practise extended so racing could start early on Sunday hopefully avoiding the predicted thunderstorm. On the final run I was having a ball, pushing it hard and perfecting lines. As I came in to the last corner in the woods I drifted out which might have been fine but I clothes lined a tree and it predictably won! I hit the deck head first furrowing the track with my helmet before looking up to see my bike fast approaching my face, typical! I brushed myself off and figured that I was done for the day. I wouldn’t normally stop on a crash but the rest of the track had been perfect and I knew another run was pushing my tired and now sore body a step too far and would just mean more crashes! I think this means I’m growing up or something?!

A shower in the sun (where the wind blew my shower curtain up flashing my bare ass to the world), barbeque, beer with friends and even more laughter finished off a fab day on the bikes perfectly.

Sunday morning was overcast but warm and the midges made themselves known from the start. We were out on track early due to the new timings and waiting for the track to open in the shady forest we were all quickly swearing and smacking at the nasty biters as they plagued us in a swarm. The track had dried out overnight but the morning dew made the rocks greasy and unpredictable whilst the dusty lower section had slightly more grip. 2 practise runs warmed up my tired legs and I was eager to get on with racing.

Lining up for my qualifying run the pre-race banter was in full flow and thankfully the track was running almost to time so we didn’t have the lengthy delay we’ve had at other rounds. I set out of the gate and had a great run down the track. A moment of panic near the top after I thought I popped a tyre had me trying to check my front wheel at the same time as avoid trees, it wasn’t pretty but I realised it was fine and carried on. After that my run was clean and smooth, not perfect but it felt good. I crossed the line sitting in 7th, just 100th of a second off 6th place and pretty happy with the result. There weren’t any major surprises in peoples rankings at qualifying. Over the season you get used to not only how fast you are relative to everyone else but also which tracks each rider performs better on. I knew getting a place higher than 7th was a tall order for race runs.

I felt calm and ready at the start of my race run. I pedalled off the line and into the first bus stop where I slid out coming to a stop sideways across the track, feet on the floor with the seat of my bike caught on my shorts and in all kinds of trouble. Somehow I stayed upright and scrabbled to get back on and get going. I pushed it harder to make up for my early mistake and things went from calm to ragged and I seemed to hit every stump, root, verge and tree, bouncing from one line to the next. Despite my ragged run I managed to regain some of the time I lost in the first section and finished a second up from my qualifying time. Everyone had gone faster and it looked like I’d finish in 7th but one of the girls got a puncture moving us all up a place and I finished in 6th.

As we packed up the rain started and it absolutely hammered it down. The field and track quickly turned into a waterslide and we watched (from the safety of the van with a glass of prosecco!) as the senior, expert and elite men crashed and slid out on their way to the finish line showing anger and frustration at their times. I was glad the race had started early and we got our run in before the weather turned, it also made clean up a lot easier.

So another great weekend all in all. My training meant that despite a big crash I got up and kept going with only minor injuries. I am super grateful for all the shoulder work I’ve been doing in the gym! It was great to have Emily back and Amanda join us but sad that other friends weren’t able to be there. The race family is a great thing to be part of and a big part of why I love racing. I can’t wait to get to the next race and have more fun with more friends. Oh and more bike fun obviously!