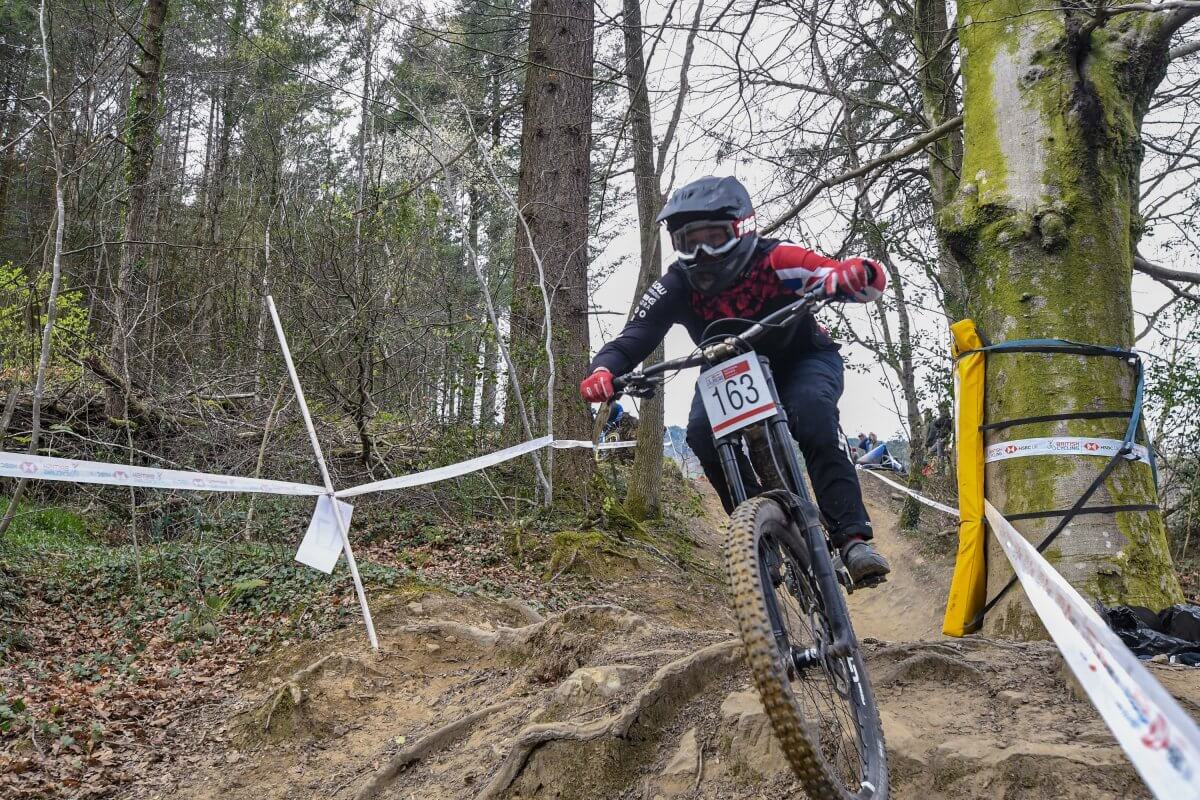 The first round of the national series was always going to come as a shock. I didn’t feel ready after the off season and it felt like it was here too soon. Add in the fact that it was at one of the most physical and technical tracks on the circuit and it seemed a bit full on. I was also dreading Rheola in early April, I figured it would be a mud bath and we couldn’t be lucky enough to get dry races there 2 years in a row.

The week of the race, listening to the rain pelt my windows, I tentatively checked the weather forecast. I was in utter disbelief that it was going to be drier at Rheola all week than at my house, that couldn’t be right? I hoped it was but figured I would pack my waterproofs anyway, after all, at the race last year no one could remember a dry race at Rheola before then!

Friday came too soon and I loaded my car with a fraction of the usual kit which felt weird. I was staying at a lovely B & B since there is no camping at the race venue; I had decided my old bones might benefit from a comfy bed. I arrived early evening after nightmare traffic caused a big delay on the roads and rushed to fit in a track walk before dark. It was a glorious evening and the track was dry. The weather forecast had been right, haha there is always a first time!

I really enjoyed racing Rheola last year, the track was fast, dusty and technical and despite the huge number of crashes, from me and others, I was really looking forward to it. At the same time the huge number of nasty injuries from last year had me feeling a bit nervous. Every run at Rheola last year had me grinning from ear to ear but also sighing in relief that I made it down in one piece. The track walk confirmed this year was going to feel much the same.

The first run on Saturday felt sketchy as I struggled to get used to the loose turns filled with marbles, giant roots trying to snarl my wheels and the general roughness that tried to shake my teeth out of my head. I had to remind myself that the first run here always felt like that and many of the later ones would too! At the bottom of that first run I was already grinning but the feeling of barely in control terror was also there. A deep breath and some trackside banter calmed those nerves and I couldn’t wait for the next run.

The next few runs were amazing! Emily and I rode together as usual but each run we joined different people as well and we pushed the speed that bit faster, trying to speed up and find some flow.

There were 2 features I didn’t hit last year and really wanted to this year. A step down into a corner that would be fine if it was straight but after seeing some nasty crashes involving heads straight into that berm I just couldn’t find the enthusiasm for it! The other was 2 small steps at the very end that were easier to double than land in between but with a definite square edge and a load of people hitting the ground there as well I just couldn’t get my head around it. I felt an amount of pressure to do them as I knew I could, but I couldn’t balance the risk with reward in my head. I rationalised that they were 2 small parts of a long track and letting them ruin the rest of it was silly. I put on my brave pants and stuck to my decision not to do them. It felt hard, probably harder than just doing them, but I wanted to enjoy my weekend and didn’t need the extra pressure.

Emily and I went up for another run early afternoon, joined up with 2 of the other ladies and set off for another fun run. The first section was amazing, we were flying and everything felt great. I was pushing the edge of speed and control but loving every second of it. I came round the next corner to see Emily going down hard, grabbing my brakes I slid to a stop grateful that we never ride too close to each other even when riding in a lady train. I realised Emily was hurt and the icy cold fear kicked in. It was clear poor Emily wasn’t getting up and we needed a medic. The team were amazing and before long Emily was off to hospital and I was sat at the top trying to stop shaking and sort my head out so I could do another run. I knew if I didn’t do it then I wouldn’t race the following day but my fear was making it hard to commit too. I was worried about Emily and scared of the track. I loved the track and knew that crashing has always been a part of the sport we all love, after all we’ve all been there, but seeing it happen with a friend was hard.

Thankfully we had a long wait and I set off down the track to try and enjoy a cruisy run. I didn’t commit to things and reigned in my speed quite a lot but I got down and surprised myself by enjoying it. Things were looking up for tomorrow. Things improved further after some wise words from one of my coaches (thanks for the pep talk Ash!).

I slept badly worrying about the track but woke up keen to get back on track and get going. It was weird not riding with Emily; there are those people you always ride with that you form an easy going order with, maximising on each other’s strengths and knowing how to get the best out of each other. The other girls are amazing to ride with but it isn’t the same. I heard a few guys saying their usual riding buddy wasn’t there and they were finding it weird too. It made me realise how much of racing is about someone else as well as yourself. I ride on my own a lot and I’m happy riding with others but there’s more to racing than just riding and I was feeling a bit out of sorts.

My first run was really lairy but I was grinning like a loon at the bottom. My next run was great. I was holding back a little after yesterday but loving every second as my lines came together and spectators brought a great atmosphere to the Welsh hillside.

I went up for qualifying hoping for a steady run where I hit all my lines and enjoyed myself. I had a great run that felt smooth and controlled while still fast until I got within 100m of the finish line and all hell broke loose! I caught the edge of a depression weirdly, bounced at 90 degrees and somehow avoided the expected high side by throwing my backside on to the saddle and my feet on to the floor. Phew crash averted but then I had to do the double steps with neither foot clipped and gracelessly donkeyed down them and over the line with my eyes wide in terror!

Somehow I had qualified in 7th which was better than I expected in a stacked field. Everyone had had wild runs with some mischief but thankfully everyone was over the line. I watched the elites come over the line with some incredible times and started thinking about heading up for my race run.

Waiting at the top I felt calm and in control even though I was a little bit nervous. I was ready to go and weirdly didn’t blast off with the crazy tree hitting rush of a normal race run. I couldn’t find my flow in the top section but I had fun, nailing lines and talking to myself. The next section of track felt great and as I blasted through star wars on line and in control I was over the moon. The last section felt better than the previous run and I came over the line 2 seconds faster having had a fairly clean run. I dropped 2 places in to 9th but was so chuffed to see I had taken 19 seconds off my time from last year!

It was a weird weekend full of highs and lows. I loved the track and even loved that on the edge feeling. There wasn’t a single section of track where you could relax and the only predictable thing about it was that it would feel sketchy in places and you just had to hang on through it. I hit my lines and when I saw some video from friends I looked in control, on line and fast. I was chuffed with the improvements on last year, all that work in the gym and focus on nutrition was paying off. I struggled with the mental side of seeing a friend crash horribly and finding the confidence to get back on. I also struggled not having my normal race buddy to ride with more than I expected. Choosing not to hit features I knew I could hit while everyone else overcame their nerves and hit them was also hard but I accepted my choice then and I’m still happy with it now.

Overall a great start to the season and I am really looking forward to my next race. Things are coming together and I am loving my bike more each ride. I cant wait to see where the next race takes me.