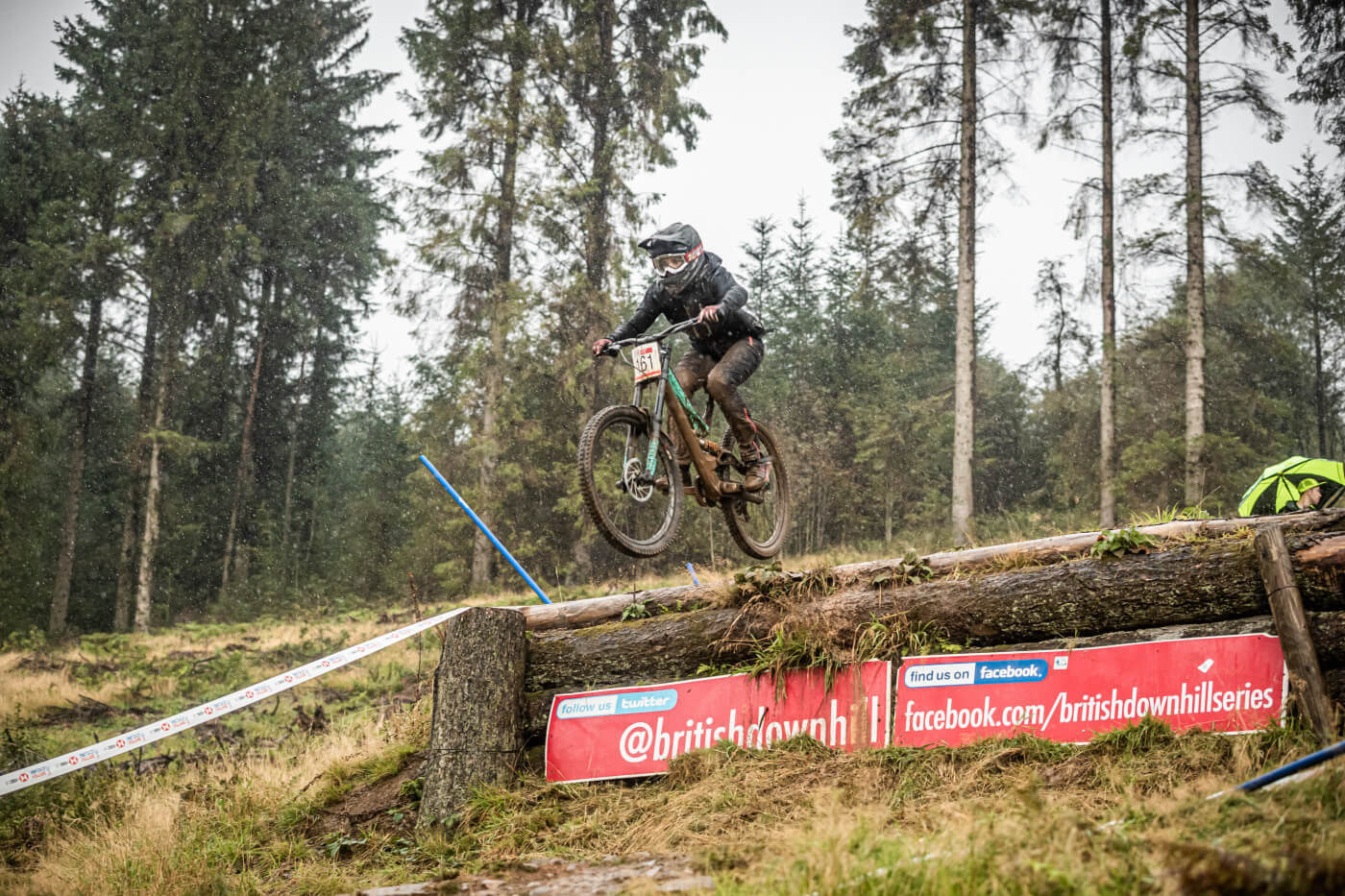 So that’s it, another season over and with downhill racing not on the agenda for me next year, I feel a little sad that it marks the end of what has been a huge part of my life for the last few years.

It’s been a roller-coaster year for me, injuring myself at the first race of the year, then I got married mid season, then finally getting back on track to finish 3rd at national champs, then crashing again at Hopton. The missed races meant I didn’t stand a chance of getting a result in the overall series, but I wanted to race the last round of the national series at Ae forest.

After a 6 and a half hour drive on Friday, me and teamate Becca arrived at Ae forest just about in time for a track walk before the sun set. This was our first glimpse of the infamous “Elevator” at the end of the track, a ridiculously steep grass bank, easily mistaken for a mini “cheese rolling hill” from back home in Gloucestershire.

The rest of the track was a nice mix of rocky sections, tight wooded sections and an open “bike park” section with a big step down, huge berms and a double. So aside from the terror of the elevator we were pumped for practice.

On Saturday morning, I tried not to let it put me off that one of the first riders down crashed on the Elevator as I was walking past ready to head up for my first run. It was a glorious sunny day Saturday so at least it was dry!

We queued an hour and a half for the uplift, which was rubbish. Without taking more than a 20 minute break to eat, we only managed 5 runs of a 3 minute track in 7 and a half hours. According to the locals, this is just what you should expect when racing Ae Forest.

I enjoyed the riding and the time queuing meant plenty of time to chat to other riders. After a few minutes of contemplation on the first run I managed to convince myself to ride down the terrifying “Elevator” and of course as these things always go, it wasn’t as bad as it looked.

Unfortunately the forecast changed and the rain arrived about 2am and there was another downpour as practice started on Sunday, which continued through practice and conditions on track got pretty sketchy in places, particularly the Elevator, which was now basically a mud slide.

We were told to anticipate race runs being cancelled due to the weather so seeding run might count as our race run. So I put Saturdays drier kit back on and switched back to flat pedals for dry shoes and the ability to put a foot out instead of crashing. It felt like I rode half of my seeding run with either one or both of my feet off the pedals which made it incredibly messy. My back wheel drifted sideways as I went in to the Elevator but it straightened up and I crossed the finish line in 4th just 0.04 seconds off teamate Becca in 3rd.

There were groans from all the girls as they announced we would actually have to do race runs, so it was back to the tent to figure out what to do about kit as we were now completely out of clean or dry kit.

Race run went pretty similarly to seeding run and I just wanted to survive. Another slow messy run left me in 4th. I knew my riding had been well below my ability but I hadn’t crashed and it was nice to finish the season with a podium. And finally a podium with teamate Becca!

I feel a little emotional saying I will not be racing downhill again. I love racing because of all the people you meet from all over the UK with the same passion and drive, but unfortunately my life plans for next year do not allow for racing and the commitment it requires.

I am extremely grateful to Flow MTB who have supported me for the past 2 years. I feel very lucky to have had their support and friendship and wonderful teamates too.