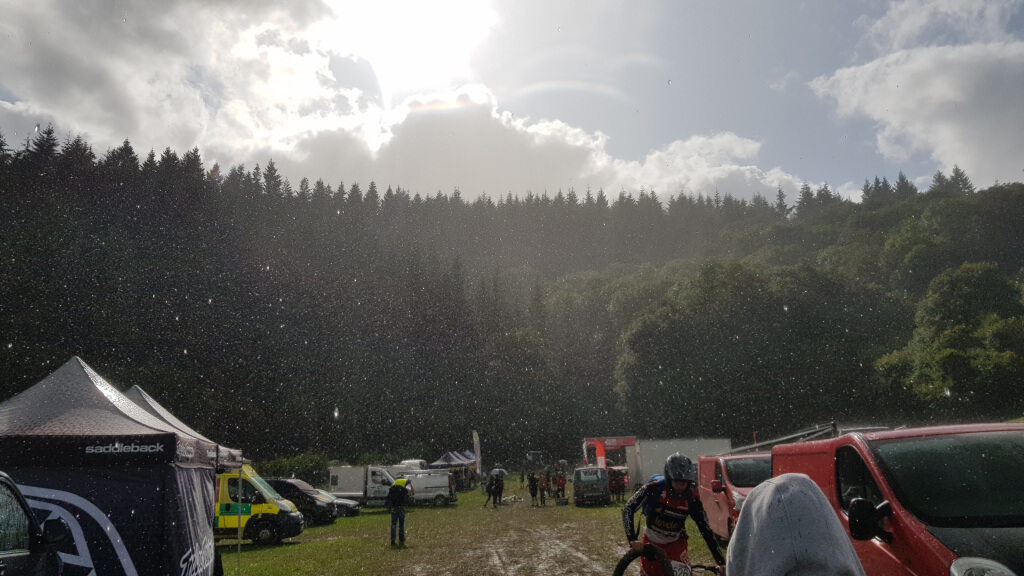 Torrential rain, a new puppy and gallons of mud; the perfect recipe for camping!

The week leading up to round 4 of the national series was not the most ideal race preparation. I made a long drive to the other end of the country to pick up Toby, my 9 month old rescue springer spaniel, getting home very late and feeling very tired. I then spent the next 2 days getting to know my new puppy, realising he liked to get up early (which I knew because he jumped repeatedly on my face and tried to eat my ears) before packing him and my existing spaniel into the car to go racing.

The weather had been wet that week and the Friday was no exception. I arrived to a water logged field in a torrential rain storm and got soaked setting up my tent. Emily, my team mate, was an absolute legend and left the dry, warmth of her tent to get soaked helping me put my tent up. With that sorted I rushed around moving stuff from the car to the tent and tried to arrange it so my hungry, previously underfed and therefore starving, springer couldn’t get in to it. I decided to track walk regardless of the rain since I was already wet and the dogs needed a walk whatever the weather.
The track was sloppy with a stream running down it and a huge pond in one corner. Thankfully it was quite hard pack and rocky for much of its length so I figured it would dry up over the weekend which was forecast to be sunny. There was a new freshly taped section at the top which was wide with lots of line choice but largely flat, very soft and completely untouched leaving lots of conversation about line choice, what ruts might appear over the weekend and whether it would be rideable. My puppy discovered that mud was awesome and he and Charlie gallivanted around the hillside nose deep in it. I also took a trip down part of the hill on backside so we returned to the tent looking like we’d been to a wet Glastonbury. A jet wash shower of everyone soon sorted the mud out and then there was the small task of 3 adults and 2 dogs trying to eat dinner in the confines of a tent while the puppy made leaping flybys at any scrap of food he saw.

We agreed a late start Saturday so the track could dry out but as predicted I was up quite early with the dogs so had a leisurely morning in the sunshine strolling around in my PJs. When we finally got on track I was surprised at how greasy it was. The pools of water, river and even most of the slop had dried off but the rocky sections were unexpectedly slippery. The top section was littered with riders on the floor. The soft loam had already become huge ruts and holes which resulted in crowds of riders standing watching trying to decide on lines and laughing at the carnage of those who tried the lines.
On the first run down I had just started to get to grips with the sketchy greasy conditions and started trusting some grip when I slid my front wheel in to a tree stump and fired myself over the bars into a big tree. I stood up in the bushes figuring I had lost everyone I was riding with when I spied Emily in the bushes just round the corner. We had apparently tried our hand at synchronised crashing, going down almost simultaneously. I reckon it was worth a 7 from the judges!

As the day went on the track dried out more and more. It became less greasy and more fun to ride, which lead to some sketchy lines over tree stumps, sideways take offs and squirrely landings as the pace picked up. The top section remained a nightmare. It was different on pretty much every run and it was impossible to get through quickly. Elite and amateur riders alike were being taken down by sniper roots, boggy holes and left scratching their heads about how to do it consistently. I was having a lot of fun, sure it wasn’t the best track, in fact the top was flatter than many xc tracks but I was riding in the sun with friends having a blast.

We went for an evening track walk with friends and discovered a whole variety of sneaky lines that they pointed out to us.A BBQ and my first ever smores (not as good as plain toasted marshmallows) made for a fun evening especially when Steve decided after 3 marshmallows he should probably call it until I sheepishly pointed out I had already had 9!

Normally on a race day I only do 2 warm up runs but with new lines to hit, entry points to find and some pace to pick up I managed to squeeze in 4! Thankfully it was a short track and the Pearce Cycles uplift was as efficient as ever.

Going into qualifying I hadn’t managed a perfectly clean run all weekend. The track was greasy and inconsistent; I never quite knew where I would slide out but sliding out and missing a line seemed fairly guaranteed on each run making it consistently inconsistent! Qualifying was fun and I had a great run. It wasn’t perfectly clean but I largely hit my lines, I stayed on my bike and I was pleased to be sitting just off the podium in 6th a second back from 5th place. I really wanted a second national podium this season and hoped I might be able to pull off a faster race run and join team mate Emily up in the top 5.

As we approached the time for our race runs I bumped into some friends who bemoaned the fact that rain was due. My previous weather report had suggested less than 0.2mm of rain so I wasn’t unduly bothered until they showed me the rain radar and it was clear it would be considerably more than that. We hoped that it might come in after our race runs like Bala but sadly that was not to be. The rain arrived and it poured and poured, stopping only about 10 minutes before our race runs. Although the sun came back out as we waited at the top it was clear the track would be wet. I theorised it wouldn’t be that wet under the trees so wasn’t too concerned.

I set off with the intention of riding it like it was dry. I hit the rooty boggy top section and although it didn’t feel too slippery I immediately found myself way off line in new territory! I rode what I found in front of me until I exited onto familiar ground at the end of the section. The next section of track felt terrifying! It was wetter than expected and super greasy! After a few near misses, a couple of spectacular saves and some slower more cautious riding I was relieved to make it out into the rest of the track without a crash. I knew I had a bit of time to make up after those 2 sections so concentrated on keeping it smooth for the last section. I came over the line sitting in 1st with 5 riders still to come. The next rider came over the line and although I had closed the gap they were still ahead of me by just under half a second. Next was Emily and the time ticked by but still she hadn’t appeared. I was relieved when she came into sight but the layer of mud on her indicated a lie down and I watched as I happily realised I would make the podium but sadly realised it wasn’t likely to have Emily on it.

Sure enough the remaining riders put in great runs and I held on to 5th place and my second podium at nationals this year. Not only was I really chuffed but my season goal has been a series podium and with another strong result this was starting to feel like it might be possible despite my poor result at the first race. Looking back at the split times was a surprise; my magical mystery tour through split 1 was the second fastest in our category! I had been right about my cautious middle split, those few slides and extra brakes made me second slowest (doh get off those brakes!!) and then I averaged that out with a nice mid pack last split to put me mid pack overall!

So as the season starts to draw to a close and everything is feeling distinctly autumnal it has been a great year so far. Two races left, one at Pearce and then off to Scotland for the last round of nationals before a nice break over winter, well netball season so not exactly a break but a break from racing! Now for some blackberry picking before heading off for the last Pearce and some hopefully drier camping.